Join the Company as they rehearse Arthur Pita's new ballet. 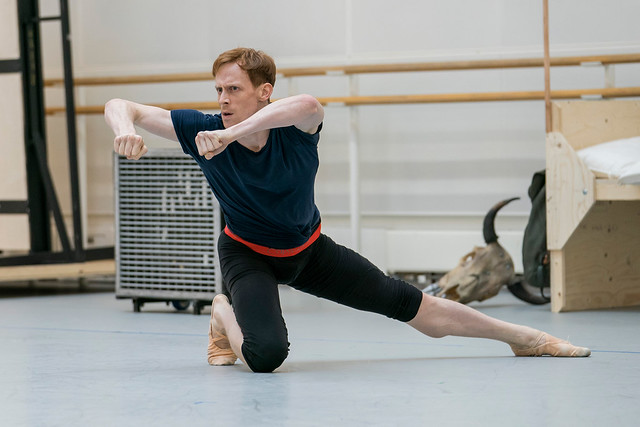 Edward Watson in rehearsal for The Royal Ballet's The Wind © 2017, ROH. Photograph by Tristram Kenton.

A world premiere with The Royal Ballet is always an exciting moment in the dance world, and anticipation was high for Arthur Pita's The Wind, which had its debut performance at Covent Garden earlier this week.

Following Pita's award-winning adaptation of Kafka's The Metamorphosis, The Wind is inspired by an eerie silent film starring early Hollywood icon Lillian Gish and is the choreographer's first work for the Royal Opera House Main Stage.

On 7 November 2017, audiences were offered a glimpse into rehearsals as part of an ROH Insights event. This event is now available to watch again on-demand.

As well as a chance to see Royal Ballet dancers Francesca Hayward, Edward Watson and Tomas Mock get put through their paces by the choreographer, the stream also featured contributions from composer Frank Moon as well as set designer Jeremy Herbert and costume designer Yann Seabra. It was presented by Senior Producer Emma Southworth.

The Wind is being performed in a mixed programme alongside Twyla Tharp's The Illustrated 'Farewell' and Hofesh Shechter's Untouchable.

Tickets are sold out, although returns may become available. A limited number of tickets will be released each week as part of Friday Rush.

Leave a reply to Sara · Cancel