Mimì, Butterfly, Liù, and even Tosca (to a certain extent) - Giacomo Puccini bestows the quality of innocence on his most famous heroines.You could even argue it’s precisely their innate naivety or genuine purity that leads to their tragic death.

But can Manon Lescaut, who seeks out a life of wealth and luxury, also be seen as innocent? Latvian soprano Kristīne Opolais, who is currently singing the title role in Jonathan Kent’s production of Manon Lescaut, isn’t so sure: ‘Unfortunately, I don’t feel [much] pity for her death,’ she revealed at a recent ROH Insight event. ‘[For Madama Butterfly,] you really feel sorry for her, I think even more than for Mimì. Manon knows what she wants and she’s very intelligent.’ 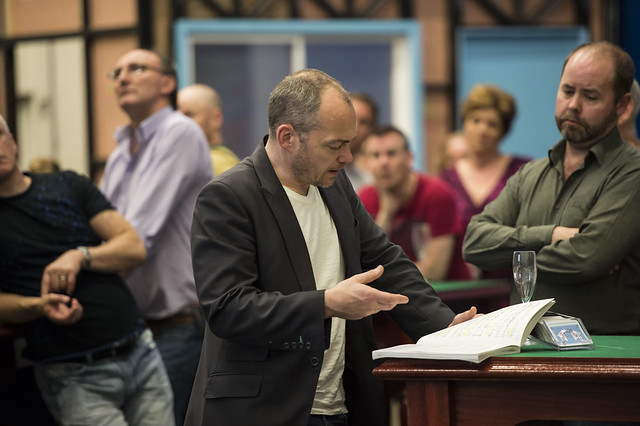 Christopher Maltman in rehearsal for his role as Lescaut in Manon Lescaut ©ROH/Bill Cooper, 2014

For British baritone Christopher Maltman, who plays Manon’s brother, Lescaut, there’s a pivotal moment in Act II of the opera, when the heroine is facing impending arrest, which shows her true nature. ‘She could have escaped,’ he says. ‘But she goes back for the jewels, and gets caught. I don’t think she’s entirely innocent.’

While Manon may be guilty of - and ultimately pays the price for - the calculated risks that she takes in her pursuit of luxury, Opolais believes that the Puccini character does truly experience love. ‘She’s a really young girl,’ the soprano explains about the events that unfold in Act I, when Manon meets Des Grieux, played by German tenor Jonas Kaufmann. ‘When you are 16 or 17 or 18, you meet somebody and you really think that it’s for the rest of your life.’

Whether Puccini’s opera is about an innocent girl who is corrupted or about the obsession of a woman who self-destructs, Maltman believes it’s Manon’s lover who demonstrates true innocence. ‘It’s Des Grieux that follows her [to her death], not the other way around. Throughout the piece, for me, he’s the totally pure one.’