Watch: ‘It’s strong and it’s epic’ – Members of the cast and creative team on Boris Godunov

Bryn Terfel and Antonio Pappano share their thoughts on why Musorgsky's opera is a masterpiece. 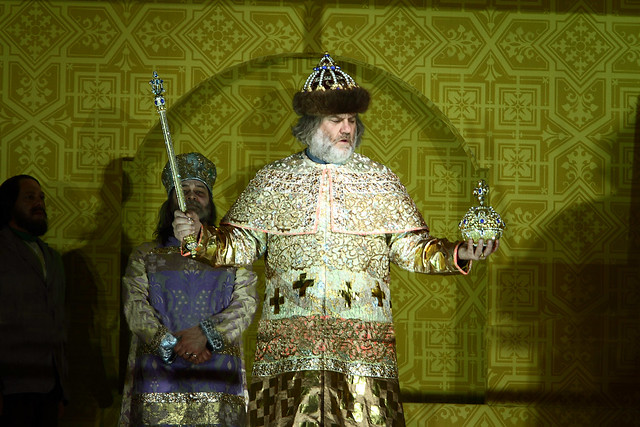 Richard Jones’ production of Modest Musorgsky’s Boris Godunov was relayed live to cinemas around the world on 28 March 2016.

Before curtain up, audiences saw this short film featuring interviews with Bryn Terfel, who sings the title role in the Russian opera, and Music Director of The Royal Opera House Antonio Pappano. The film also shows footage of the opera in rehearsal, with Susanna Stranders accompanying on the piano.

If you missed the screening here’s a chance to watch the film:

In the film, Pappano describes how the atmosphere of Boris Godunov is set from the opera’s opening:

‘Two notes into this opera and you know you are in a Russian opera, and it’s something magnificent and human.’

Pappano, who conducts all performances of the production, is joined by Welsh bass-baritone Bryn Terfel to discuss how the music encapsulates the inner turmoil of the lead role.

‘That chord somehow tells the story all about [his] state of mind,’ says Pappano – ‘And the guilt is there also,’ Terfel adds.

Musorgsky’s opera was inspired by the true story of the Russian Tsar, Boris Godunov, who rises to power by supposedly murdering the true heir, nine-year-old Tsarevich Dmitry. The work is the Russian composer’s only completed work and is known as one of the greatest bass-baritone roles in the canon.

‘By any measure Boris Godunov is a masterpiece. I think we’re blessed to have you singing the role’ Pappano says to Terfel, ‘and that you’ve trusted us with your debut in such a titanic manner!’

The next live relay during the 2015/16 Live Cinema Season will be The Royal Ballet's Giselle on 6 April 2016. Find your nearest cinema and sign up to our mailing list.