Videos from international dance companies give an insight into what makes this pioneering British choreographer so exciting. 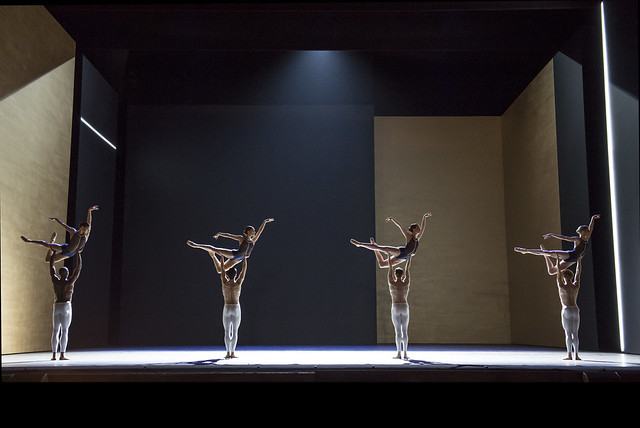 Dancers of The Royal Ballet in The Human Seasons © ROH / Bill Cooper, 2013

David Dawson has emerged as one of the leading British choreographers of his generation. Until recently that fame was built principally on his works for international companies: Dutch National Ballet, Mariinsky Ballet, Semperoper Ballett and many others. But he’s recently started to create more work for companies in his native land: after making Faun(e) for English National Ballet in 2009, Dawson made his Royal Ballet debut in 2013 with The Human Seasons, and 2016 saw the creation of his new full-length version of Swan Lake for Scottish Ballet. These and many other works all show the qualities that make Dawson so exciting: not least of which are the daring extremes to which he pushes the classical technique.

Dawson began his career as a choreographer with Dutch National Ballet and has maintained a close relationship with the company over 20 years – he’s now DNB’s Associate Artist. In tribute to this relationship, in 2015 Dawson created Empire Noir, a work of ‘pure dance’ that celebrates DNB’s ‘push towards the new… the real creative energy that is very present within the programming and with the dancers in the studio’. The virtuoso, high-energy result is set to a commissioned score by regular collaborator Greg Haines, who also wrote the music for The Human Seasons.

Dawson’s distinctive choreographic language is shaped by the dancers he works with. Speaking around Dawson’s 2013 work Overture, DNB dancer Sasha Mukhamedov describes Dawson’s super extended style as ‘extreme classical. Everything is the same classical position but over the top’. Fellow dancer Edo Wijnen explains that ‘in the studio he pushes you to go further. When you think “this is the end of the movement, this is the end of the line”, he pushes you and through tiredness and through exhaustion you get to that point when you can go further than the line – where you can reach extremes. That’s also the point where you change mentally and you give whatever is really natural, and that’s what he is looking for’.

One of Dawson’s best-known works is A Million Kisses to My Skin, created in 2000 for DNB and which has now travelled the world. Dawson sets Bach’s Harpsichord Concerto in D minor in a work of exuberant post-classicism: his tribute to classical ballet and the sensation of performance. Dawson explains, ‘I had it a couple of times on stage, and it feels just like that – a million simultaneous kisses to your skin’. Dancers from Pacific Northwest Ballet, one of the many international companies that have performed the work, describe its challenging thrill: ‘we just have to go to the max as much as we can.’

Narrative ballet is an important thread that runs through Dawson’s career, particularly in his full-length creations for Dresden’s Semperoper Ballett – including a new version of Giselle. ‘I first saw Giselle when I was about seven’, says Dawson, ‘and it was kind of my reason to dance, to become a dancer. I fell in love with the piece. And as I grew older and saw it performed and danced it myself, it cast a spell over me. I believed it and wanted to believe it. I guess I’m a romantic at heart’.

Dawson’s choreography is always illuminated by his musicality. As he described while working on Scottish Ballet’s Swan Lake, ‘When you’re working with music it draws out certain things from you’. Here music guided his interpretation of the characters: ‘Odette glides and floats and flies. Odile is the rhythm maker: she’s whipping the air around her, stirring up the space physically, psychologically and emotionally.’ For the swan corps de ballet, ‘I see them as a halo of Odette. They represent her emotional being. They’re also being the music, moving as one. It’s mesmeric, the one emotion embodied by many people’.

The Human Seasons runs as part of a mixed programme 16–24 March 2017. Tickets are still available.

The mixed programme is staged with generous philanthropic support from the Taylor Family Foundation.