We followed the scenic painters as they prepared the backcloth for Laurent Pelly's new production. 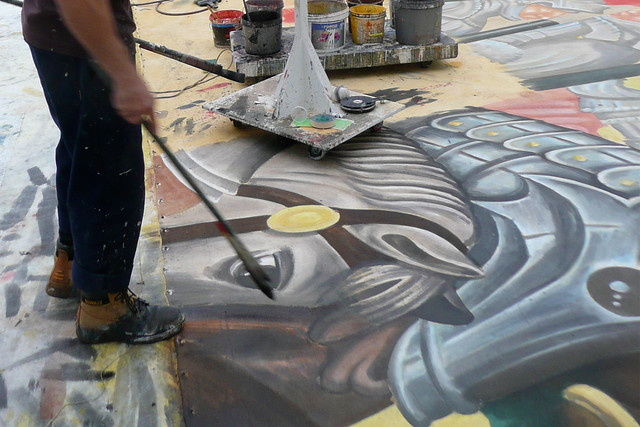 Over the summer, the talented team at the Bob and Tamar Manoukian Production Workshop in Thurrock prepared the backcloth for Laurent Pelly’s new production of Robert le diable, which opens this December.

A larger-than-life medieval battle scene, depicted on a sizeable canvas of 24m x 11.5m, it has taken a team of three about four weeks to complete, using up some 20 to 30 litres of paint.

"First the canvas is stretched out, nailed to the floor and primed. Then, the artwork is gridded up, using a 1:25 metre scale, and drawn up full-size on the cloth using charcoal. The painting, which involves a mixture of brushes, sprays and rollers, can then begin."

The workshop in Thurrock has the capacity to paint three cloths at any one time. However, some productions require up to 30 to 40 cloths, and so the team plan their schedule carefully 18 months in advance.

The Robert le diable backcloth is painted onto Scenic Flax canvas, and will last for many years. Following its Covent Garden premiere, the production will be staged at the Grand Théâtre Genève in Switzerland.

Preparation for painting the scenic backcloth at Bob and Tamar Manoukian Production Workshop in Thurrock. © ROH 2012

Preparation for painting the scenic backcloth at Bob and Tamar Manoukian Production Workshop in Thurrock. © ROH 2012


The team at the Bob and Tamar Manoukian Production Workshop in Thurrock creates many of the sets used in Royal Opera House productions. Most recently, the team built the cities of Troy and Carthage for David McVicar’s epic Les Troyens, which had its premiere last season. Find out more about the creation of the set. Cinemas around the UK will be screening Les Troyens during November.

The workshop has recently opened its doors to the public, running tours that offer an exclusive behind-the-scenes look.