Waltzing down the years: the powerful symbolism of Vienna's defining dance

From seductive to nostalgic – the fortunes of the quintessential Viennese dance have influenced how we view Der Rosenkavalier. 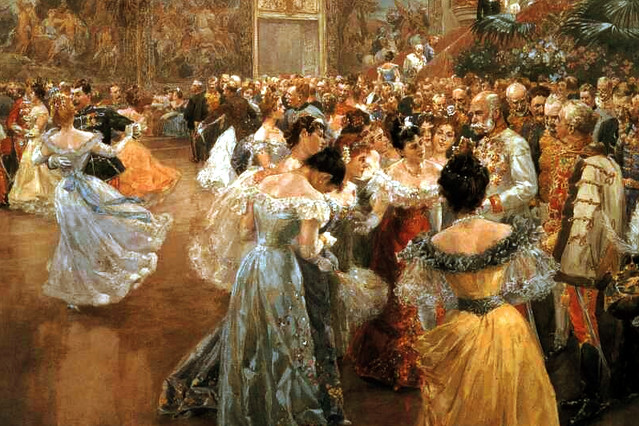 Court Ball at the Hofburg by Wilhelm Gause, 1900

One of the most enduring images of Vienna is of a city that waltzes. Elegantly dressed couples whirl around the ballroom as an orchestra plays something by Strauss – Johann II, rather than Richard, of course. And on New Year’s Day morning, the celebratory concert by the Vienna Philharmonic from the Musikverein promotes the association even further, not least with that famous, obligatory encore of An der schönen blauen Donau (By the beautiful blue Danube). When Baron Ochs introduces a waltz in Act II of Der Rosenkavalier, it is through a popular song, which then pervades the musical atmosphere and continues into Act III. If we are in Vienna, then there must be waltzes!

The waltz was associated with Vienna’s culture from the earliest stages of the dance’s evolution, through the public dance halls that opened there in the early 1800s, notably the Sperl in 1807. This identification of dance with city really took off with the musical rise and supremacy of the dance orchestras of Joseph Lanner and Johann Strauss I, and the popular waltzes those composer-conductors wrote for them. When Johann Strauss I toured around the continent, that association was sealed internationally.

The power of the waltz is a reflection of its seductive nature. In the early years of the 1800s it was considered by many an indecent dance. Not only was it exclusive of other dancers, just two rather than the more communal – and policeable – set of four or eight, but it required close physical contact. If the two partners don’t hold each other firmly, the force of the spinning throws them apart. Furthermore, it is highly advisable to look straight into your partner’s eyes all the time: that singular, fixed point of gaze helps counteract the dizzying effect of looking over their shoulder at the vertiginous impression of movement of the ballroom’s walls.

By the early 20th century, the intimate, sexual element that had disturbed the prudishly conventional but excited the dancers in the early 1800s had become one of the waltz’s principal characteristics. When Baron Ochs starts his waltz song in Der Rosenkavalier, half-remembering the words, he adopts what in 1911 – the time of the opera’s premiere – was not just a familiar but a current musical form: the associations that the waltz had by then acquired chime with Ochs’s seductive intent. The nostalgia in the music in Der Rosenkavalier’s early years of performance came through Strauss’s weaving in of rococo references to the 18th century, not through his inclusion of the waltz – indeed, the anachronistic use of the waltz in a 1740s Viennese setting provoked criticism at the Dresden premiere.

By the late 1920s, the symbolism of the Viennese waltz had changed forever. The Austro-Hungarian empire had fallen, and this seismic political shift released a shock-wave of nostalgia, not least in music and theatre. Entertainment presented a nostalgic and romanticized picture of a world destroyed. The Austrian capital Vienna, in decline itself, became a symbol of that wider fall of empire. When Richard Strauss wrote waltz music into Der Rosenkavalier, his audiences could still hear something of the contemporary in them. Only a couple of decades later, that same music had developed a different, retrospective quality at home and abroad.

As Europe headed towards war again in 1939, the pre-World War I nostalgia associated with Vienna and waltzes grew even stronger. The associations of a waltz in Vienna in 1939 were very different from those for Richard Strauss in 1911 and the first Rosenkavalier audiences. Where the Viennese waltz had for Richard Strauss provided a musical bridge for his audiences to the world they knew, for the next generation the waltz had become a musical symbol of a world that had painfully vanished during their lifetimes. Today, more than a century after Der Rosenkavalier’s premiere, can we hear a Viennese waltz in any way other than as a romantic echo from a world we never knew?

This is an edited extract from John Snelson’s article ‘Vienna in Waltz Time’, available to read in full in The Royal Opera’s programme book for Der Rosenkavalier.

The production is a co-production with the Metropolitan Opera, New York, Teatro Regio, Turin, and Teatro Colón, Buenos Aires, and is given with generous philanthropic support from the Monument Trust, Mrs Aline Foriel-Destezet, Simon and Virginia Robertson, Susan and John Singer, the Friends of Covent Garden and The Royal Opera House Endowment Fund.

Leave a reply to Bibi · Cancel