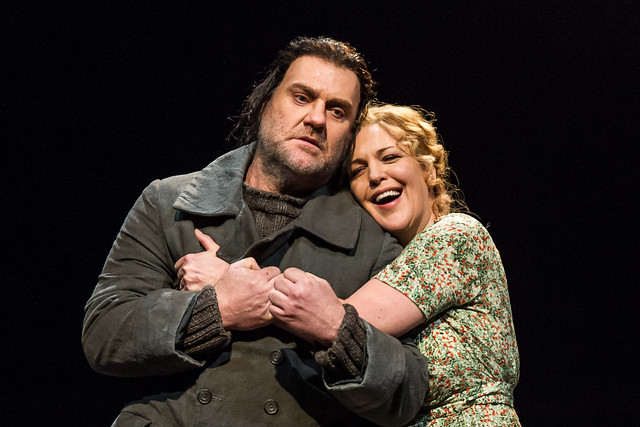 Bryn Terfel as The Dutchman and Adrianne Pieczonka as Senta in Der fliegende Holländer © ROH 2015. Photo by Clive Barda

Tim Albery’s Royal Opera production of Der Fliegende Holländer will be live screened in cinemas across the world at 7.15pm GMT on 24 February 2015.

Ahead of the screening, download our Der Fliegende Holländer Digital Programme, which contains specially selected features to bring you closer to the production.

The Olivier-nominated production is conducted by Andris Nelsons, described by Bryn Terfel as ‘everything one desires in a conductor of opera, and one of the top reasons you should see this’. Bryn performs the role of the remorseful Dutchman - damned to spend his life on the seas - alongside Adrianne Pieczonka as the self-sacrificing Senta, Michael König as Erik and Peter Rose as Daland.

Watch an interview with Bryn about taking on the role of the Dutchman. Although Bryn Terfel is currently unwell we hope he will be fit in time for the cinema relay.

The opera is based on 17th century legend of the 'Flying Dutchman' ghost ship. The ship's captain, condemned to sail the seas for eternity, is only permitted to return to shore once every seven years. His only hope for salvation lies in finding a wife who will be faithful to the death. Senta, a woman desperate to escape the drudgery of her life, may prove his escape.

Der Fliegende Holländer, which had its premiere in 1842, is considered one of Wagner’s first operatic masterpieces. Though shorter than most Wagner operas, it is technically demanding, and includes many musical and dramatic features developed in Wagner’s later operas. Explore our musical highlight from the opera, the Dutchman's supremely dark monologue.

The production opened on 5 February 2015. Read audience reactions to the opening night and add your own review.

After the relay, we will publish a roundup of audience tweets, so share your thoughts with the hashtag #ROHhollander.