The third movement of Liam Scarlett’s transatlantic ballet feeds off the excitement and velocity of the Liebermann piano concerto that inspired it. 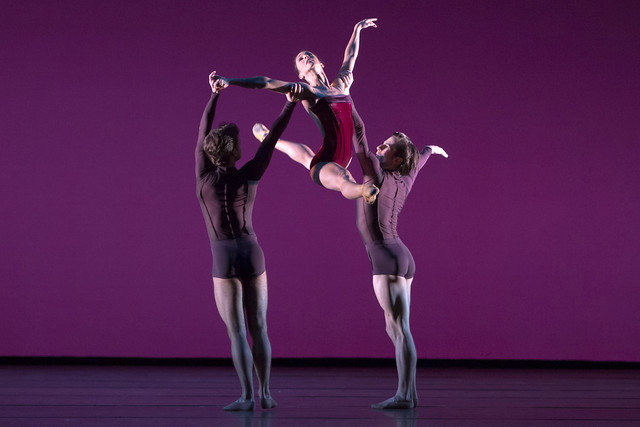 Liam Scarlett made his American choreographic debut in 2012 with Viscera – an abstract, one-act work in which he fused elements of ballet traditions from both sides of the Atlantic. The piece is in many ways typically Balanchinian, with the dancers dressed in leotards performing bold, athletic choreography to the accompaniment of a piano concerto, as in many of the great American choreographer’s works. However, Scarlett amalgamates these features with the style in which he trained; the musicality of his choreography and elements of his classical vocabulary hark back to the Ashtonian, ‘British’ ballet tradition, moulded into his own distinctive language.

The inspiration for Viscera came directly from Lowell Liebermann’s Piano Concerto no.1, specifically the work’s third movement. Scarlett describes how ‘the final movement – which is what drew me to the piece initially – was immensely fun to choreograph: a frenzy of rhythms and genres crammed into six minutes of sheer musical velocity’.

At the start of the movement, the stage is suddenly illuminated as dancers rush on from both wings. Three men and three women settle in cou-de-pied, facing upstage, as a solo woman bursts forwards to perform a lightning-quick sequence of fleet footwork and whirling port de bras. As if able to sense her presence without looking at her, the women join in with the end of the soloist’s first phrase, stepping forwards with their arms in a sassy ‘V’ shape before freezing again. Then the men take over, doubling the soloist’s movements as she spins rapidly on one foot, wrists crossed overhead, and lunges from side to side. This mirroring continues – the soloist’s steps passed between the men and women in a dynamic volley until, finally, they come together in unison.

Such intricate, rhythmic choreography is not restricted to small groups of dancers. Later in the movement, men fly across the stage with pirouettes and jetés as a group of women perform a sequence with a petit développé and hip swivel, and the soloist spins rapidly towards the audience – their cross-rhythms slicing across one another. Here, and throughout the ballet, the use of contrast is striking. As the movement continues, smooth, legato dancing is pitted against jagged staccato movements, steps are reversed and performed in different directions simultaneously, repetitions of familiar sequences are suddenly, arrestingly modified and brisk, energetic movement is juxtaposed with total stillness.

Scarlett focusses particularly on the distinction between the female soloist and the rest of the dancers. Just as Liebermann’s piano at times engages in a dramatic dialogue with the orchestra and at others is more independent, the solo ballerina is a virtuoso protagonist who shifts in and out of the group. While she appears to lead the dancers at the start of the movement, there are times when she is set apart; at one point, eight members of the corps face upstage, glued to the spot, pulsing their arms like a sinister flock of birds as she walks alone towards the audience.

As Viscera draws to a close, the soloist stands with her arms crossed over her face as the group dance. Suddenly, she runs forwards and joins them. The pack of dancers moves as one, with high-energy, muscular choreography. As a drum begins to roll, couples, groups and individuals break out in a frenzy of movement. Then, just as swiftly as it began, the ballet is over – the piano plays a plummeting scale and the dancers swing their arms overhead, collapsing forwards in sync as the stage is plunged into darkness.

The Royal Ballet performs Viscera as part of a mixed programme with Afternoon of a Faun, Tchaikovsky Pas de deux and Carmen 26 October–12 November 2015.Tickets are still available