Verdi the radical: How the free-spirited composer shocked the opera world

The composer made it his mission to subvert the rigid culture of opera, and his controversial works saw him frequently battle the authorities. 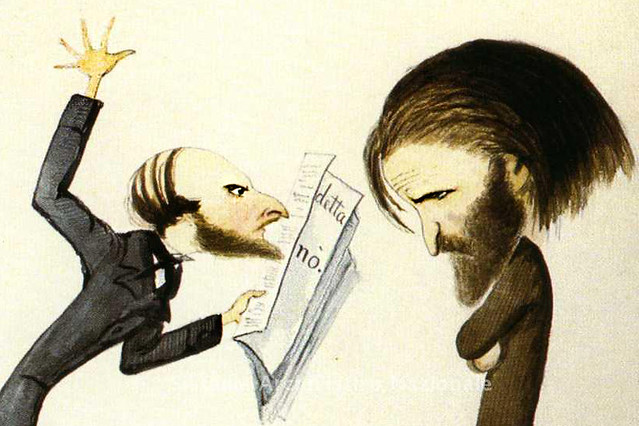 Detail from Verdi and Naples censor, caricature by Melchiorre Delfico

In 1840 Giuseppe Verdi was in a state of despair. His wife, Margherita Barezzi, and two children, Virginia and Icilio, had died within the space of two years. After initial success with his first opera, Oberto, his second, Un giorno di regno, had flopped: he was considering calling it quits on a career as a composer. Hope arrived, as the story goes, when he was inspired by the libretto for Nabucco and especially its now iconic chorus ‘Va pensiero’. The famous soprano Giuseppina Strepponi created the role of Abigaille, and the opera was a great success at its 1842 premiere. Nabucco was to change Verdi’s life in more ways than one.

Strepponi was a free spirit; she had been the mistress of tenor Napoleone Moriani, and the mother of three illegitimate children, none of whom survived. A relationship soon developed between Strepponi and Verdi, and in 1847 they moved in together. Their partnership lasted fifty years, until Strepponi’s death in 1897. The affair was initially complicated by the fact that the couple were not married (they eventually did so in 1859). The consequent gossip elicited harsh words from Antonio Barezzi, Verdi’s ex-father-in-law with whom he had remained very close after Margherita’s death. Verdi responded to Barezzi on 21 January 1852 in a long and defiant letter, asserting: ‘I have nothing to hide. In my house there lives a lady, free and independent… Neither I nor she is obliged to account to anyone for our actions… I claim my freedom of action, because all men have a right to it, and because my nature rebels against mere conformity’.

Verdi’s aggressive retort may be understood as yet another facet of an insurrectionist nature: he had, from the very beginning of his creative life, a well-articulated mission to escape and subvert the rigid culture of Italian opera composition and its concomitant mercantilism. The independence and strength of his relationship with Strepponi seemed to intensify that ambition, which he reiterated in a letter of 25 February 1850 to librettist Salvadore Cammarano, regarding a never fully realized opera based on Shakespeare’s King Lear: ‘You know that we should… treat it in an entirely novel manner… without regard to conventions of any kind’.

Such clearly articulated personal and artistic radicalism would soon manifest itself in his choice of outré subjects and situations for the three operas written between April 1850 and March 1853. In Rigoletto (1851), a hunchback’s beautiful daughter is abducted and raped; in Il trovatore (1853), a mad gypsy’s vengeful act of throwing an infant into a fire leads to fratricide; and in La traviata (1853) a consumptive courtesan’s love for a man above her social class climaxes in a passionate reunion and a tragic death.

It wasn’t easy to move such unorthodox topics past the censors, who exercised authority over all sectors of the Italian political and cultural landscape. According to Verdi scholar David Kimball, the censors’ concerns were threefold: ‘political offence, religious offence and moral offence’. Kimball quotes the words of the prefect of the Milanese police as a useful guide for understanding state resistance to potentially explosive subject matter: ‘Theatres are designed to correct morals, and must therefore never present anything but moral themes, or, if they present vice and wickedness, it must be done in such a way that virtue appears the more glorious and beautiful as a result.’

Censorship thus frustrated the progress of all three operas, and official decisions sometimes shocked the composer. A good example is an early version of Rigoletto, called La maledizione (The Curse), which was rejected outright. Verdi, deeply distressed, immediately wrote to Carlo Marzari, president of La Fenice opera house in Venice: ‘The… decree completely banning La maledizione was so unexpected that I almost went out of my mind.’ The composer’s surprise is itself a bit surprising, since his literary source, Victor Hugo’s play Le roi s’amuse (The King Amuses Himself), about an embittered hunchback and a depraved king, had been shut down for immorality the day after its Parisian premiere in 1832. Perhaps Verdi had a bit too much confidence in his name and reputation as he flaunted taboos.

But censors weren’t only concerned about plots and characters; they also scrutinized librettos for disrespectful religious references and offensive language. An object lesson is the change in wording of the Duke’s request to Sparafucile in Act III of Rigoletto from the brazen ‘I want a room and your sister’, to the far less titillating ‘I want a room and some wine’. In the case of Trovatore, Roman censors insisted that Leonora take poison offstage, because, as impresario Vincenzo Jacovicci explained, ‘suicide is not permitted’. The intended present-day setting of La traviata caused a different set of problems. While Verdi was very pleased with Traviata, calling it ‘a subject for our own age’, censors did not look kindly on a modern and compassionate take on the subject of prostitution. Despite Verdi’s objections, the costumes for the premiere reflected a quite different era, 1700 (the setting was changed back a year later).

What seems now a capricious change of time period in Traviata also clashed with the music – specifically its tinta (colour), Verdi’s term for the unique sonority of an opera. Thus, the tinta of Traviata arises from the dances – especially the waltzes, real and implied, which evoke the ballrooms of the 19th century and not those of the 18th. In Trovatore, the tinta materializes in the clang of the Anvil Chorus, and the funereal ‘death motive’ (with its ‘short-short-long’ rhythm) that drives the ‘Miserere’ in Act III; while the so-called ‘curse motive’ of Rigoletto articulated in the opening bars of the prelude permeates the entire opera.

What lingers in the ear, however, and long after the last echo has died out in the opera house, are the heart-stopping words and melodies of all three works: Gilda’s longing for the man she knows only as Gualtier Maldè in ‘Caro nome’ (Dear name); Azucena’s grisly fireside narrative ‘Stride la vampa!’ (Raging flames!); and Violetta and Alfredo’s declaration of love ‘Di quell’amor, ch’è palpito dell’universo intero, misterioso, altero, croce e delizia al cor’ (Love that is the pulse of the entire universe, mysterious, noble, both cross and delight of the heart). It is surely these strong emotions, powerfully expressed and truly felt, that have ensured these operas’ enduring popularity.