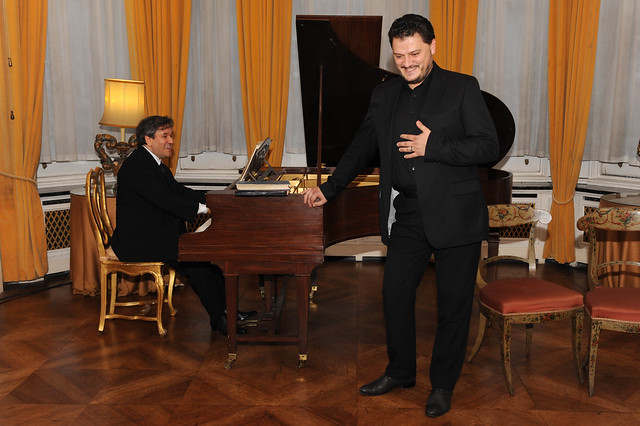 The Italian Ambassador recently hosted the launch of our 2012/13 Verdi production syndicate at the exquisite Italian Embassy.

The Verdi syndicate encompasses support around Nabucco, Don Carlo and Simon Boccanegra, the three magnificent Verdi operas The Royal Opera are presenting in 2013, the bicentenary year of Verdi’s birth. Tony Pappano will be conducting the revivals of Don Carlo and Simon Boccanegra, and Plácido Domingo and Leo Nucci will share the title role in the new production of Nabucco from Italian Director Daniele Abbado.

During the evening, in the stunning surroundings of the Ambassador’s residence, guests were treated to an informative and musical evening with a performance from Maestro Pappano accompanying tenor Aleksandrs Antonenko. The duo gave powerful performances of excerpts from Otello and La Traviata to great applause.  Alexandrs is currently singing the title role in Otello at the Royal Opera House under the baton of Maestro Pappano; considered to be the most exciting revival of the production in a long time.

Following the performance, Maestro Pappano and Director of Opera Kasper Holten discussed the dynamics between directors and conductors when it comes to staging productions. Although these two talented men have not yet worked together in this capacity, we were told that this is now scheduled to happen in the not-too-distant future!

Supporters very much enjoyed the evening, and we would like to thank the Italian Embassy for hosting the occasion.

To be part of the Verdi syndicate, supporters are invited to support either at production level, or as a role supporter. If you would like to find out more, please contact us on philanthropy@roh.org.uk or phone Magdalena Ziarko on +44 (0)207 212 9266.