Urban Ballet: the inspiration behind Infra and As One

Find out more about the concepts behind the choreography. 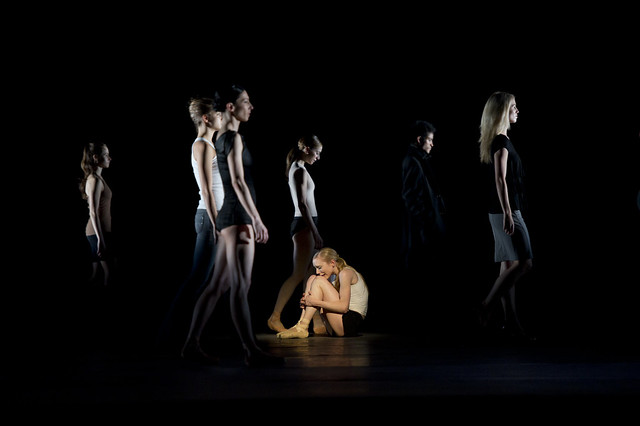 Artists of The Royal Ballet in Infra © Bill Cooper/ROH 2010

Urban life is the inspiration for choreographers Wayne McGregor and Jonathan Watkins in Infra (2008) and As One(2010) from The Royal Ballet’s latest triple. Both works explore the idea of identity in the urban world and show people as individuals and as part of a group. As One begins with a solo that expands into a collective dance; Infra shows a group of commuters and zooms in on individuals and couples. The dancers break out into their own worlds, some engaging in fraught relationships, others in dialogues with themselves. Their bodies twitch and flicker in an angular dance style to Graham Fitkin’s Stravinskian score and to Max Richter’s minimalist score with its sounds of city life.

This onstage activity is underpinned by both works’ sets. Infra means ‘below’ and suggests what lies beneath. Julian Opie’s electronic screen is set high above the stage with anonymous figures walking across, uninvolved, as if on a bridge or a road. Underneath, the human body is fully realized with the physical and emotional presence of the dancers on stage. The same concept is used in As One with Simon Daw’s set of video screens acting as windows into the lives of those in a tower block. The action on stage focuses on a house party, a couple’s living room, a waiting room and a banker’s office.

The idea that other people’s lives are being briefly revealed before us is also illustrated in Infra when six couples are framed in windows of light; we look voyeuristically into various strangers’ lives. Each pas de deux is different and yet they somehow mirror each other, suggesting humankind’s interconnectedness.

We are reminded of our need to connect and to reach out to others when, at one shocking moment, the stage is swarmed with people who walk across the stage uninterested and oblivious to one another, as in the rush-hour of a city commute. In the centre of this crowd Sarah Lamb, invisible and silent to all, is overcome with loneliness and falls to the ground, wailing uncontrollably. In the programme notes, McGregor says ‘physical empathies…rescue the lost narratives of the population on stage’, perhaps to create what Watkin’s calls a ‘harmonious coexistence’.