Verdi’s music for the chorus ‘Ve’, se di notte’ shows how laughter can be used to heighten tragedy. 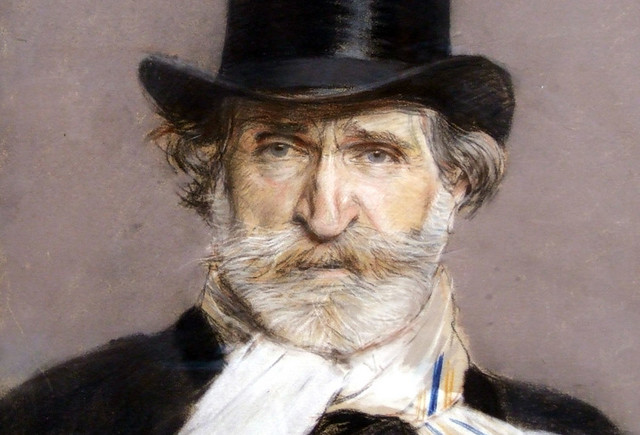 At the end of Act III of Verdi’s Un ballo in maschera, laughter seems to dominate the character of the music. It’s not uproarious mirth, but wry chuckles. In a graveyard at midnight, a band of men with a sinister purpose (conspiring in an assassination, in fact) come across a man apparently enjoying a secret assignation with a woman. Definitely some embarrassing extra-marital affair, they all think.

The man is Renato, and the woman turns out to be his wife, Amelia. The clandestine meeting now looks like a couple trying to spice up their relationship – hence the chuckles. The words of the first of the conspirators, beginning ‘Ve’, se di notte’, describe the scene mock-heroically: an enamoured hero bringing his bride to lie on bed of dew in the honeyed moonlight. However, the lewd undertones are unmistakable.

The music of this mockery includes the effect of a laugh, as the voice line suddenly leaps up and immediately comes down again. This first conspirator's voice is soon joined by a second in repeated, rhythmic laughter. The risible tone is amplified with little slides up to each note of the same tune as it is played by the violins. Quickly, the whole gang of conspirators joins in with this laughing theme.

What the conspirators don’t know is that Renato has been equally shocked to discover the woman is Amelia. He found her (face hidden) with Riccardo, Renato's best friend and master, and by now is wrongly convinced she is having an affair. As this Act II finale builds, the chortling music of the men is contrasted with long, anguished melodic phrases from Amelia – she feels completely misunderstood – and bitter, muttered words from Renato. All three elements come together in a central choral section, which includes a moment of musical group reflection developed from a familiar Italian opera form, the pezzo concertato (this 'little concerted number' is a convention you often find in finales of 19th-century Italian operas).

Before the chorus of conspirators arrives, there had been a tense scene between Renato, Amelia and the ‘other man’, Riccardo. Verdi underscores it with a little repeating rhythmic pattern of a crotchet and two quavers, in reference to the ominous, inexorable march of fate. This musical motif returns prominently near the end of the Laughing Chorus as Renato plans to meet the conspirators to join their assassination plot against Riccardo. The motif we keep hearing is suggestive of impending doom and links to the equally simple, repetitive patterns of laughter: in essence, it is a single musical quality used in one place for tragedy, and in the other for comedy. At the end of the act the even, rhythmic laughter of the conspirators fades away as they go off into the night – but by now the fact of such insistent rhythmic repetition in itself has an association with inevitable disaster.

Such use of comic qualities to heighten the tragic recurs in Verdi’s operas. There is a notable parallel in his earlier opera Rigoletto, where comedy and tragedy combine in the story of a cursed and taunted court jester. At the end of Act I scene 2, courtiers blindfold Rigoletto and convince him they are kidnapping the wife of another courtier. In fact, they are kidnapping Rigoletto’s own daughter under his very nose, although they think she is his mistress. Another case of mistaken relationships leading to uncomfortable revelations – and tragic consequences – counterpointed by a wry, comic chorus.

When comedy and tragedy are so blatantly juxtaposed on stage, the audience can respond to the tensions between these emotional poles. The reactions and fates of the unhappy central characters – the butt of the misplaced humour – are more poignant as a result. And we know that the laughter will inevitably be followed by tears.