ZooNation's Mad Hatter reveals the eight tracks – from Michael Jackson to Missy Elliott – which inspired him to dance, and inform his character. 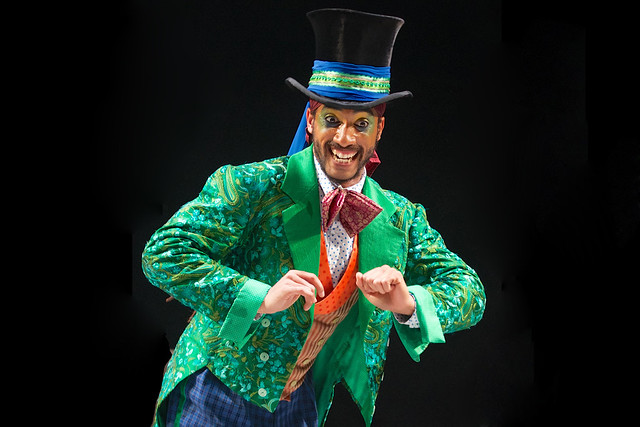 Following its sell-out run at the Royal Opera House in 2014, ZooNation’s hip-hop theatre show The Mad Hatter’s Tea Party returns to London this winter for a run at the Roundhouse.

Kate Prince's vibrant production is inspired by the characters of Lewis Carroll’s Alice’s Adventures in Wonderland and stars street dance star Turbo as the Mad Hatter. The dancer found fame as a finalist on Sky's 'Got to Dance' and in CBBC's 'Turbo Boost', but honed his skills dancing in music videos for artists including Madonna and Will Smith. He also appeared as a backing dancer with Whitney Houston.

With rehearsals well underway, we asked him to share the eight music videos which inspired him to dance, and influence his portrayal of one of literature's most iconic characters:

‘Bad was the first music video I watched that made an impact on me,' says Turbo. 'The troupe of kids look like they are having the best time – I really wanted to be one of them!’

‘Michael Jackson had everything as a dancer. He shows a great range of styles in Bad, even some ballet moves.’

Turbo cites Jackson as the biggest influence on dance in recent history. ‘Everyone imitates him – but no one can really compare. He was one in a million.’

Listening to British electronic artists The Prodigy before a performance helps Turbo get into the anarchic character of the Mad Hatter.

The music video for the group's best-known hit was filmed in an underground tunnel, and Turbo was drawn to the rawness of the staging and lead singer Keith Flint's dancing.

‘There’s something kind of wild about it,’ he notes. ‘He’s so carefree as a performer – listening to this song brings out the wildness of my character.'

Taking the tempo down a notch, the video for The Verve's mid-90s anthem sees lead singer Richard Ashcroft barrelling through the streets of East London, colliding with anything and anyone in his path.

For Turbo, it's Ashcroft's raw physicality and attitude which makes the video compelling:

'I remember this was one of the videos that was always on MTV Base and it's weirdly mesmerizing', says the dancer. 'I wanted to be one of those people that he was walking into just to see what my reaction would be!’

Jordan Knight - 'Give It To You'

This track is a nostalgic choice for Turbo - who remembers watching the video and longing to be in the sunny theme park in America. It sticks in his mind for the no fuss, catchy choreography –'This routine is pretty simple, but it just sits on the beat just right.’

The second member of the Jacksons on his list, Turbo is a big fan of the family's youngest sibling.

‘She’s a strong woman I really admire and this song makes most people smile', he says.

For Turbo, 'Together Again' reflects the team spirit of Zoo Nation. The company create their choreography by sharing videos during rehearsals and attending each other's dance classes, to get an idea of each performer's individual style.

Producer J Dilla had a profound effect on Turbo: 'He saved my life in music and changed my life', says the dancer.

Dilla cut his teeth in the underground hip-hop scene in Detroit as a member of the group Slum Village. He worked with some of hip-hop's biggest names including Janet Jackson, Busta Rhymes and Q-Tip before his tragic, early death at the age of 32. The acclaimed instrumental album Donuts was his final record and was written from his hospital bed. ‘He created such amazing music,’ says Turbo. ‘It's hard to pick one track – but his sound makes me want to move.’

The performer is of the view that chart hip-hop at the moment is dominated by rappers that sound similar – or, 'word drainers', as he dubs them. 'What I like about 'Man Don't Care' is that the lyrics haven't been Americanized'.

'Don't get me wrong, chart hip-hop can be great to dance to, but I really like it when you can relate what you're listening to'.

Missy Elliot - 'Get Ur Freak On'

Grammy award-winning rapper and producer Missy Elliott’s 'Get Ur Freak On' was listed 14th on Rolling Stone magazine's list of the best songs of the decade.

The song opens with the line ‘Everyone start dancing together wildly now’ in Japanese, but its meaning is infectious without the translation. ‘This video is evidence you don’t need to painstakingly learn a routine,’ says Turbo. ‘The music makes anyone to dance.’

The Mad Hatter’s Tea Party runs from 30 December 2016—22 January 2017 at the Roundhouse. Tickets are still available.