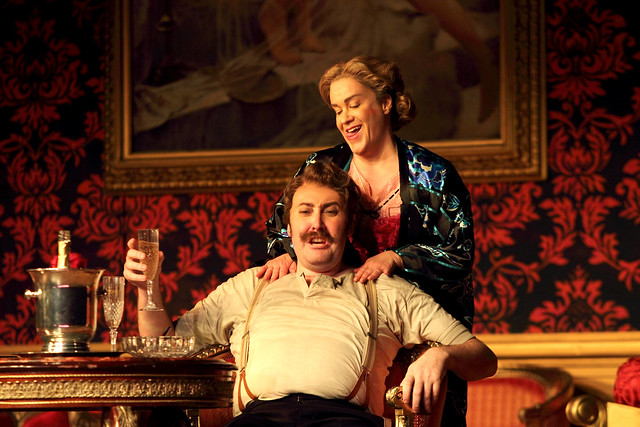 The trouser (or breeches) role – a young male character sung by a woman – has been part of opera since its early days. And the role type has flourished since, in a variety of contexts.

In the 18th century, the bulk of heroic male roles were written for soprano or alto castratos – but the trouser role was never just a ‘castrato substitute’: Handel’s Radamisto and his heroic adolescent Sesto in Giulio Cesare are the most famous examples.

As castratos became a dying breed in the early 19th century, mezzo-sopranos increasingly took on Italian opera’s heroic lead male roles. Rossini wrote several principal breeches roles, including the title role of Tancredi and the soldier Arsace in Semiramide. Donizetti also created a few, although he tended to demote his trouser roles from heroes to sidekicks – as with Maffeo Orsini in Lucrezia Borgia, or Smeton in Anna Bolena. The tradition reached its culmination in 1830 with Bellini’s Romeo in I Capuleti e i Montecchi; the virtuoso writing for mezzo-soprano perfectly expresses the hero’s youthful ardour and impetuosity.

Over in France, 19th-century grand and comic opera alike saw an explosion of trouser roles: chiefly pages and lovesick adolescents. Although they were rarely in the first rank of dramatic importance, they were usually given beautiful arias, such as Ascanio’s ‘Mais qu’ai-je donc?’ in Berlioz’s Benvenuto Cellini or Siébel’s ‘Faites-lui mes aveux’ in Gounod’s Faust. The page-boy became such a popular character type that composers even added them to scenarios, as with the invented Stéphano in Gounod’s Roméo et Juliette, with his lovely aria ‘Que fais-tu, blanche tourterelle?’. In French comic opera, a girl could even play the hero on occasion, as with the title role of Massenet’s Chérubin, or Prince Charmant in Massenet’s Cendrillon (a nod to pantomime’s Principal Boy tradition).

In 19th-century German opera, trouser roles were usually limited to children and supernatural beings, such as Puck in Weber’s Oberon. Two notable exceptions were the young warrior Adriano in Wagner’s Rienzi, a virtuoso role modelled on Bellini’s Romeo, and the flamboyant Prince Orlofsky in Johann Strauss’s Die Fledermaus. But the the trouser role really came into his own in Germany from 1890 to 1930, with a number of feisty boy characters including Humperdinck’s Hänsel and the Schoolboy in Berg’s Lulu. Meanwhile in the former Czechoslovakia Janáček created one of the most poignant breeches roles in his 1930 opera From the House of the Dead: the boy prisoner Aljeja, described by the composer as ‘such a tender, dear person’.

But before this, in 1911, came Octavian in Richard Strauss’s Der Rosenkavalier, perhaps the greatest trouser role of all. With this young nobleman, in love with an older woman, Strauss fully exploits the breeches role’s capacity to convey youth through the high female voice, and also its slightly risqué sensuality, particularly in the opening scene with Octavian and the Marschallin in bed. He playfully draws attention to the trouser role’s inherent artificiality by having Octavian dress up as a girl. And he provides one of the most satisfying portrayals of late-adolescent love through Octavian’s stunning duets with the Marschallin and Sophie, and the sublime trio for all three characters in Act III. Small wonder that in his next opera Strauss insisted on writing the ardent male Composer in Ariadne auf Naxos for mezzo-soprano. His breeches roles are a crowning glory of a distinguished tradition.

The production is a co-production with the Metropolitan Opera, New York, Teatro Regio, Turin, and Teatro Colón, Buenos Aires, and is given with generous philanthropic support from the Monument Trust, Mrs Aline Foriel-Destezet, Simon and Virginia Robertson, Susan and John Singer, the Friends of Covent Garden and The Royal Opera House Endowment Fund.