Trade Secrets: How do you train a chicken?

Never mind the singers — the real stars of Francesca Zambello’s colourful production of Carmen are a charming horse, a docile donkey and four unflappable chickens. 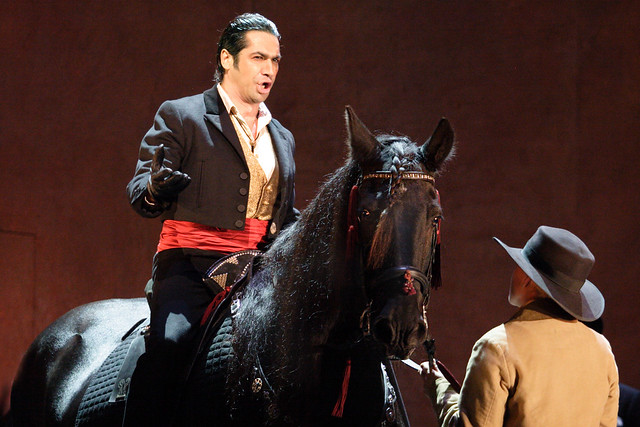 When a director asks for animals in a production, it’s up to the backstage team to source them; in the case of Carmen it’s the responsibility of Jack Stookes, who is stage managing the opera’s revival in October.

‘We use a company called Animal Ambassadors, managed by an animal agent, Kay Weston. She has been arranging the contracts with The Royal Opera for years and always supplies us with fantastic animals that are all stageworthy, trained using a reward system. When a show is new we liaise with her and the director over breeds and colours; when it’s a revival we make sure what we get is as consistent as possible with what we had before.’ Jack and his team also have to deal with the red tape: health and safety inspections, council licences and registering the chickens with DEFRA.

Besides the birds, Carmen features a black horse, Louis, and a donkey, Pollyanne, which are both regulars to this production. The animals are brought to Covent Garden at least an hour before curtain-up – Westminster Council has provided a space for a horsebox outside the theatre — then taken backstage by their handlers to acclimatize in their own holding areas.

‘Louis has been doing shows for years,’ says Jack. ‘He’s gentle and unfazed by anything, whether an orchestra, singing or gunshots.’ The singer playing Escamillo makes his big entrance on horseback, and to prepare he spends a day at the stables. ‘It’s vital the singers and horse are introduced,’ explains Kay. ‘It’s actually written into the insurance contract. The singer gets familiar with the tack and the horse and gets used to riding and singing at the same time. People are often more nervous than the animals.’ 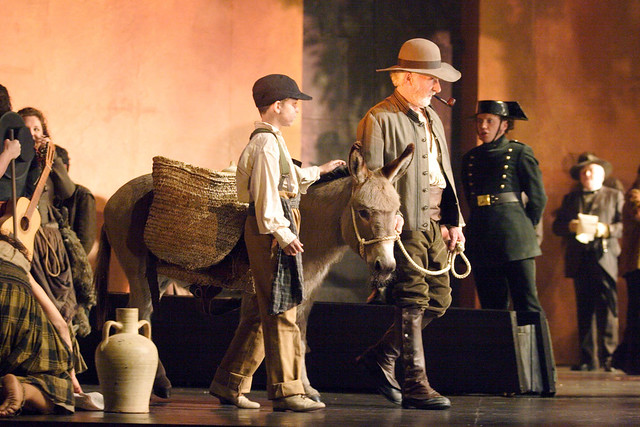 Handlers, who are in costume to blend in with the cast, also accompany animals on and off stage at all times. The chickens are brought on with handlers — two birds in a basket and two held by a handler, usually Kay in costume. In earlier productions they would let the chickens peck around on the stage but they tended to wander off into the wings. ‘Last time The Royal Opera asked for white chickens, to stand out on stage,’ says Kay. ‘This time we are providing brown ones. The white ones were a little too feisty. I only have the chickens for a few months so perhaps they’d not been handled enough as chicks. We don’t train them as such but we make sure they are comfortable with being held.’

‘The chickens seem very happy,’ adds Jack, ‘so much so that they lay – quite often we have a couple of fresh eggs on the props table after performances.’

The team has to be aware of potential problems, however, as Jack explains: ‘Last time we did Carmen there was a beam of light that cut across the stage in a performance, which we didn’t have time to fix before the horse went on. When Louis got to that point he stopped, thinking it was a gap. It’s important to be aware of things that the animal might interpret as unsafe, and the handlers are vital as they know the animal and can tell us.’

There’s also the matter of safety on stage. ‘Louis is fitted with rubber shoes to stop him from slipping,’ says Kay, ‘but when we provided another horse for Falstaff, his hooves were too big for the shoes so they treated the stage with Slip No More.’

And what about the delicate subject of toilet training? It’s easily done with dogs, but horses and donkeys are surely another matter.

‘It’s usually not an issue during a performance,’ laughs Kay. ‘They have a person sitting on their back and are standing on a hard surface, which isn’t conducive. If it does happen it’s during an early rehearsal where the animal is unfamiliar with the surroundings. Handlers always have a basket on stage to catch anything, or we’d just bring on some mops — I’m sure the audience would love it! Let’s say you just have to go with the flow.’

Leave a reply to Cat · Cancel