Is Tosca a ‘shabby little shocker’ or the most perfectly constructed thriller in operatic history? 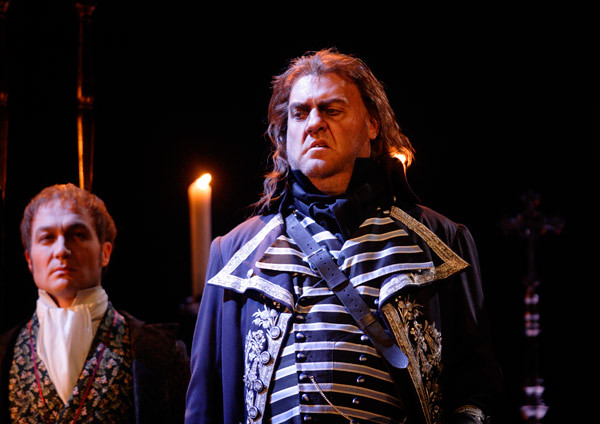 Is Tosca a ‘shabby little shocker’, in the well-worn phrase of skewed critic Joseph Kerman, or the most perfectly constructed thriller in operatic history? Most people’s experience will confirm the latter. The fact that Puccini also matches his sense of pace with a stream of the greatest operatic melodies confirm’s Tosca’s role not just as a repertoire staple but also as the pinnacle of music theatre.

The music: phenomenal powers of invention

Have you noticed how many of the greatest operas grab you by the throat with their opening gestures? Puccini does it every time, and never more thrillingly than with the three carefully-placed chords delineating the all-powerful reach of evil police chief Scarpia. The first act of Tosca then hurtles into the action, relaxing to give us the melodic respite of painter Cavaradossi’s first aria, Recondita armonia and his sensuous duet with his adored diva. Scarpia’s terrifying appearance comes bang in the middle of the act, and the set-piece finale has the potential for both grand-opera spectacle and the most spine-tingling of curtains.

In the most celebrated of all second acts, sometimes staged – as for example with Maria Callas at the helm – by itself, Puccini turns the dramatic screw so tight that the tension can be unbearable. First-time audiences may not detect every transformation of the composer’s spider-web of themes, but they’ll feel his impeccable sense of dramatic timing. Vocally, the thrills peak with the tortured Cavaradossi’s exhilarating cry of ‘Victory’ when he hears that his Republican cause has defeated Scarpia’s Royalists at the Battle of Marengo. And there’s a breathing space with the most excerpted of all soprano arias, Tosca’s ‘Vissi d’arte’. Orchestral subtlety comes to the fore in the dumb-show of her actions after the tyrant’s brutal death.

There’s further tone-painting for the Roman dawn of Act III, and another high watermark in the art of the aria-lament, Cavaradossi’s ‘E lucevan le stelle’ with its infallibly heartrending cry of ‘I have never loved life so much’ . The last duet is  shorter and more fragmented than the first: many tenor interpreters, Domingo among them, believe that Cavaradossi has no faith in Scarpia’s safe-conduct, but goes through with it for the sake of his beloved Floria. Minutes later, it’s all over. Has any other operatic composer apart from Janacek, and possibly the Strauss of Elektra and Salome, ever packed so much phenomenal invention into so short a time-span?

Three divas lie behind the opera – the singer of the original play, the great actress who played that singer, and the soprano role that is Puccini’s Tosca. Floria Tosca ‘exists’ in the vividly painted 1800 background of skilful playwright Victorien Sardou’s original drama, far more elaborately interwoven with historical events than the pared-down operatic libretto of Puccini's collaborators Giacosa and Illica. It was the great Sarah Bernhardt who incarnated the role – Puccini saw her perform it twice – and it was for her that Sardou incorporated the famous mime scene, equally celebrated in the opera, where the diva performs her last rites around Scarpia’s corpse. Verdi was attracted to the subject in his old age, but would have needed changes to the last act – presumably to the shock of Tosca’s suicide, which even Puccini and his librettists at one stage thought of altering to death by the same firing squad who have just shot her lover.

At the opera’s 1900 premiere, the audience was duly shocked by such vividly represented scenes of torture (albeit mostly offstage) and murder (very much onstage).  Yet the composer who already had Manon Lescaut and La bohème to his credit scored a further triumph, and never looked back. Tosca has been staged in all kinds of circumstances and set in every conceivable period (Mussolini’s fascist Italy has been a recent favourite of many directors) – though many productions prefer to stick to its minutely detailed scene-setting of real Roman locations: the Church of Sant’Andrea delle Valle, the Palazzo Farnese and the Castel Sant’Angelo.

This article has been categorised Opera and tagged by Jonathan Kent, Production, Puccini, The Royal Opera, Tosca