‘There is a place for magic in the world’: Philip Pullman and The Firework-Maker’s Daughter

The award-winning author talks about his Eastern-inspired fairytale and the importance of introducing the arts to children. 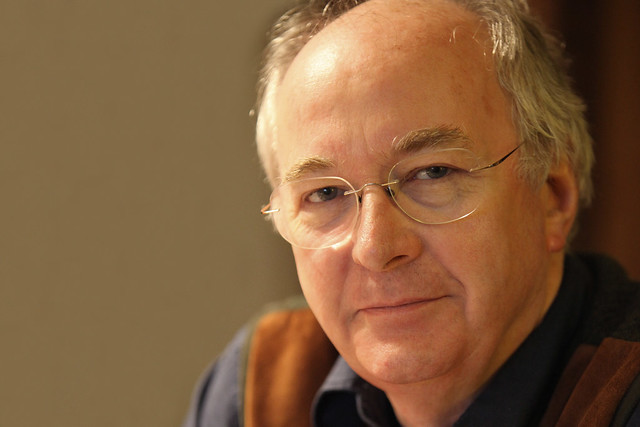 Oxford-based author Philip Pullman has won acclaim around the world for his literature for all ages. His award-winning short story The Firework-Maker’s Daughter, originally a school play, was adapted into an opera by David Bruce and Glyn Maxwell in 2013 and returns to the Linbury Studio Theatre this Christmas. We spoke to Philip about the inspiration for the story, the influence of fairytales and the importance of storytelling.

What was the inspiration for The Firework-Maker’s Daughter?

I was very interested in theatre and toy theatre [miniature paper model theatres] from the middle of the 19th century. Looking through old playbills and posters, I found a play that was called The Cataract of the Ganges, or The Fire-Fiend, or something like that. I didn’t need to see the play – the title was enough to set me going. The thought of the Fire-Fiend, and what I can do with a character like that.

You’ve described the book as a fairytale – how did this influence the writing of it?

The characters of a fairytale aren’t really characters as we understand them in the modern sense. They haven’t got much depth to them; their character’s all on the surface. So in this story, Chulak is a cheeky boy, Lalchan is an anxious father, Lila is an ambitious, adventurous girl. You don’t have the urge to keep things like motive, memory, regret, hesitation and doubt – the characters just act. Your job as a story-teller is to give them interesting things to do, and then relate them clearly. That’s part of the pleasure of writing a fairytale. I found myself in touch again with the roots of narrative, and the pleasure that I got from that kind of engagement with story.

As you say, the protagonist Lila is strong and adventurous – much like some of the women and girls from your other stories. Do you set out to write strong female characters?

I don’t believe in writing stories to make a political point. Lila just appeared to me – as Lyra did in His Dark Materials – and wanted to be written about, so I did a story about her. That said, in a society that’s obviously patriarchal and male-dominated, it’s more interesting to have a female protagonist. She has to overcome obstacles that other people don’t, so it makes for a better story.

The Firework-Maker’s Daughter is set in a world of magic and fire-fiends. Do you think it’s important for children to have a sense of fantasy as they grow up?

Fantasy is an important part of the way we understand the world. Some people get very nervous about fantasy because it’s says things that aren’t true, but I think there is a place for magic in the world – and it’s in stories. We’d be a lot poorer, imaginatively, and possibly emotionally, if we cut out all the magic. Children understand what some clever adults don’t – it’s adults who have forgotten the importance of pretending.

Is this part of the wider importance of the arts for children?

It is such an important part of every childhood to be taken to things like museums, concerts and theatres. I vividly remember being taken to the theatre when I was at school. We’ve got to get back to our freer, kinder, more generous way of dealing with children, which includes exposing them to every kind of art: drawing, painting, music, dance, acting. They’ve got to be shown these things, not only because they are wonderfully life-enhancing and they help everyone’s development – emotionally, physically, intellectually – but because they are part of the general culture of the world around them. An education isn’t complete without these things.