The true story behind ‘Va pensiero’, Verdi’s famous Chorus of the Hebrew Slaves

Verdi’s much-loved chorus from the opera Nabucco has achieved an almost mythic status as a politically influential piece – but the truth is a little more complicated than that. 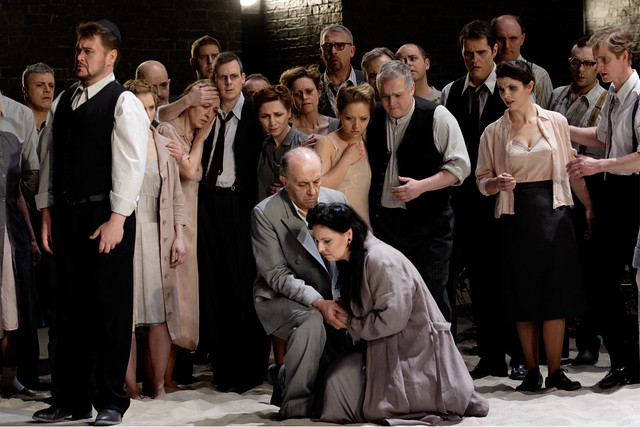 It’s a story most opera lovers will know. Verdi died in Milan in 1901, and the solemn procession that accompanied his funeral was an occasion for communal mourning on the grandest scale. 300,000 gathered in the streets (more than half the entire population of the city), and sang the chorus ‘Va pensiero’, that great lament for a lost homeland that Verdi had written some sixty years earlier in his first operatic triumph, Nabucco. The event supplies one of the most potent and often-repeated stories about music’s power to gather and articulate political sentiment.

Far from spontaneous, however, the rendition on that cold morning in Milan had in fact been carefully planned by the civic authorities. Advertisements in local newspapers had enjoined singers and orchestral players to participate; the resulting musical hordes were conducted by none other than Arturo Toscanini. But soon enough, the civic planning had all been forgotten: the chorus welled up in story as nothing less than the voice of an entire people.

Inventions swirling around ‘Va pensiero’ go back and forward from that funeral rendition. It has become part of opera myth that at Nabucco’s premiere in 1842, the chorus was received as an expression of contemporary Italian feeling about their nation state, then under the yoke of foreign domination – in spite of the fact that there is no evidence the chorus excited patriotic fervour in its early years. Quite when it acquired its patriotic status is not entirely clear, but overwhelmingly this transition occurred after Italian unification in the early 1860s: at a time when the chorus’s gentle nostalgia made it an ideal vehicle for fond reminiscences of an earlier period of action and heroism.

There is plenty of evidence that, in later life, Verdi himself encouraged the chorus’s canonization. The image of Verdi this fostered, as a revolutionary composer whose early choruses had done no less than inspire the struggle for Italian nationhood, then became standard in the early 20th century. It was notably encouraged, and for obvious nationalist reasons, during the Fascist years, and was sustained post-World War II by a continuing celebration of the heroic aspects of Italian nationalism.

A few caveats might be useful here. Verdi was indeed Italy’s most popular opera composer at a time when opera was Italy’s most important form of cultural activity. It would be strange indeed if his operas were not in some way involved in Italy’s great revolution. Nor has anyone attempted to deny that Verdi himself was, at times at least, a decided patriot. In the wake of the 1848 revolutions he even wrote an overtly patriotic opera to mark the establishment of the Roman republic of 1849 (La battaglia di Legnano).

But, in spite of all this, the making of Verdi as ‘bard of the Risorgimento’ overwhelmingly occurred after unification. It seems likely that the bardic image first surfaced, almost accidentally, as the acrostic 'VIVA VERDI' was briefly in vogue in late 1858 and 1859 (with each letter of the composer's name standing for a letter of a key unification figure's name, future king Vittorio Emanuele Re D’Italia). This image then emerged decisively in the late 1860s and 1870s, when the new Italian state, economically and politically fragile, was actively in search of national monuments to shore up the tottering state.

Does it matter vitally when Verdi’s reputation as the Bard of Italy’s Risorgimento began? Perhaps it does. The current popular view of Verdi imagines a steady and above all optimistic progress; it is nourished, like so many stories about music and revolution during these years, by a stubbornly heroic picture of the 19th century, one in which history marches in single file towards a positive goal. But is the 19th-century nation state really something to celebrate so uncritically? If such a thought interrupts for a moment the automatic warm glow we experience when we hear (or sing) ‘Va pensiero’, then so much the better.

This is an edited extract from Roger Parker’s article ‘“Va pensiero”: Biography of a Chorus’, available to read in full in The Royal Opera’s programme for Nabucco.

The production is a co-production with La Scala, Milan, Lyric Opera of Chicago and Gran Teatre del Liceu, Barcelona, and is generously supported by Rolex and The Friends of Covent Garden.