Join the Company around the world as they celebrate 70 years at the Royal Opera House. 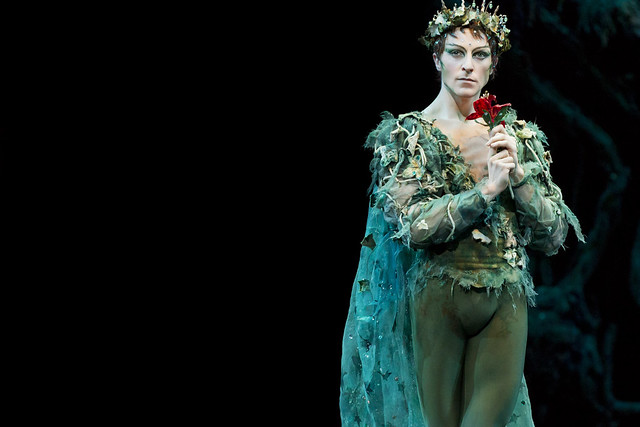 Steven McRae as Oberon in The Dream, The Royal Ballet © ROH/Johan Persson, 2012

Frederick Ashton was The Royal Ballet's Founder Choreographer and one of the most influential dance figures of the 20th century. As The Royal Ballet’s 70th Season at the Royal Opera House draws to a close, a mixed programme celebrating Ashton's contribution to the Company takes to the stage: The Dream, Symphonic Variations, and Marguerite and Armand.

The mixed programme will be broadcast live from the Royal Opera House to BP Big Screens across the UK and cinemas across the world on 7 June 2017 at 7.30pm BST.

To enhance your viewing experience, access our Ashton Digital Programme for free using the promo code FREEASHTON, and enjoy a range of specially selected films, articles, pictures and features to bring you closer to the production.

The Dream is an enchanting adaptation of Shakespeare’s A Midsummer Night’s Dream which captures the comic confusion that arises in the play as mortal and fairy worlds collide.

Symphonic Variations is widely regarded as Ashton’s seminal masterpiece – the choreographer’s first ballet created for the enormous Royal Opera House main stage. Instead of following the tradition of grand narrative ballets, Ashton opted to create an abstract work on the beauty of pure movement.

Marguerite and Armand tells a story of doomed love. The piece was inspired by the electric dance partnership of Margot Fonteyn and Rudolf Nureyev, and the final pas de deux – as Marguerite lies dying in Armand’s arms – is among the most moving moments in all of 20th century ballet.

Read more: Our Ballet Essentials guide to the Mixed Programme

The three ballets are performed to works by a variety of composers. The Dream is set to music by Mendelssohn, one of the greatest musical prodigies of his time. His score for A Midsummer Night's Dream has been used in many stage productions, and its witty melodies are the perfect accompaniment to Ashton's light-hearted ballet.

Symphonic Variations provides a perfect response to César Franck’s brooding Variations symphoniques for piano and orchestra, and Marguerite and Armand is set to Franz Liszt’s La lugubre gondola and his well-known Piano Sonata in B Minor.

The three pieces are very different from each other, brought together to showcase Ashton's ability to tell a story at the same time as offering an abstract response to music. The Dream and Marguerite and Armand are both narrative pieces, while Symphonic Variations is simply a celebration of dance.

The mixed programme will be performed by Principals and Soloists of The Royal Ballet including Akane Takada, Steven McRae, Marianela Nuñez, Marcelino Sambé, and Francesca Hayward.

After the relay, we will publish a roundup of audience tweets, so share your thoughts with the hashtag #ROHashton

If you're watching the performance at a BP Big Screen location, send us a selfie with the same hashtag for the chance to win a prize.

The Royal Ballet's mixed programme of works by Frederick Ashton will be broadcast live BP Big Screens in the UK and to cinemas around the world on 7 June 2017. Find your nearest cinema and sign up to our mailing list.