By Nathalie Harrison (First Artist of The Royal Ballet) 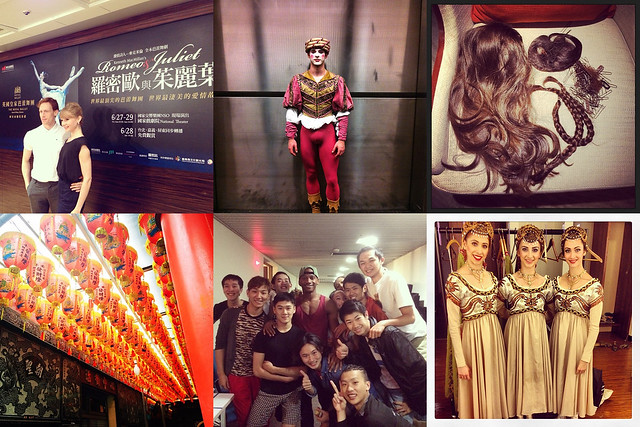 We last visited Taiwan in 2011 and three years on we're back, after a hugely successful tour-opening stint in Russia. Departing from Moscow, the Company is split over two flights (one via Singapore, and one via Seoul). Coupled with three hours battling traffic in the Russian capital, both routes are a long old schlep and we all arrive in Taipei a little crinkled from the long-haul travel.

Fortunately, Taiwan is possibly the best place to arrive in such a state. Though the Taiwanese have a strong work ethic, their culture prizes the benefits of relaxation and (crucially for us ballet dancers) muscle-limbering massages, which are both commonplace and affordable here. After a ten-hour flight - and with a performance the day after we arrive - a spot of rehab is essential and so we flock en masse to hot springs and spa treatments, soon refreshed and ready for the stage.

Three years ago we brought Giselle and a Mixed Programme and this time we’re performing Kenneth MacMillan’s Romeo and Juliet. Like Manon (also by MacMillan), it's a great demonstration of the Company's strengths and heritage, and certainly has a wow-factor. We love performing it and it’s right at the core of our repertory, so it's a show we know inside out. That said, it's not without its challenges - particularly for the stage crew who have to contend with the Taiwan National Theatre and Concert Hall's stage, smaller than the one back home at Covent Garden. The team are consummate professionals of course, and after a bit of adjustment, the set is ready for action.

The corps de ballet before Romeo and Juliet © Sabina Westcombe, 2014

The corps de ballet in their dressing room in Taipei © Demelza Parish, 2014

The opening night sees Lauren and Federico rock the house with an exceptional show that's all the more impressive given the constraints of only having one stage call to run through with the multiple extras the ballet requires. The local actors, despite the language barrier, do a great job at integrating quickly and processing the plot in such a short time. As always, I get a swell of pride as the famous music booms for Act 1 scene 3 (the Capulet ball). Fast forward two hours, and we're joined by our new friends for a post-performance reception. Celebrations on tour are even more jubilant than those back home as we allow ourselves an extra pat on the back for putting on a show like this thousands of miles from home.

Though Romeo and Juliet's familiarity brings with it a sense of homeliness and comfort, one thing that does have us out of our comfort zone is the traditional fish, salad and (decidedly experimentally-flavoured) dumpling breakfasts the morning after the opening performance!

Our second performance is relayed live, both to 1,000 outside the theatre, and to two other Taiwanese cities - Chiayi and P'ingtung - in a similar manner to BP Big Screens back in the UK. Many of the estimated 22,000 watching are getting their very first experience of ballet and it's an honour to give them their first taste of the art form.

In a flash, our Taiwan experience is over and after a mad dash through the bustling markets (causing our baggage allowances to be stretched to their very limits) we're soon hurriedly packing for China and the final leg of the tour. My next - and final - blog will be from Shanghai where we'll be summoning Spanish sunshine with performances of Don Quixote. Vamos!

Nathalie will be blogging from China as The Royal Ballet's Tour draws to a close.

By Nathalie Harrison (First Artist of The Royal Ballet)