The Royal Ballet in Portraits 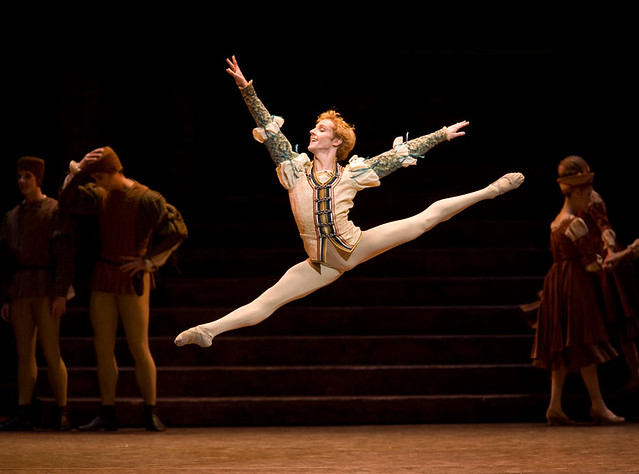 A meeting between Royal Ballet Principal Steven McRae and iconic fashion designer Sir Paul Smith is what set the scene for a novelty project - The Royal Ballet in Portraits:

"Several months ago I was asked if I could meet a young man called Steven McRae who was a big fan of Paul Smith, which I did and he came to my studio in London. After meeting him I realised that he was a Principal Dancer of the Royal Ballet and that his history was very interesting: he was from Australia, his father had an extraordinary career as a drag car racer and he was one of the youngest Principals ever."  - Sir Paul Smith

Further discussions finally led them to agree on a concept: known for his enthusiasm for photography Sir Paul would shoot 18 of the Company’s Principal dancers, creating "engaging, interpretive images to capture the elegance and character of each individual dancer.” The images were taken at the Royal Opera House’s ballet studios and backstage. Most impressively the sessions were completed in just two days.

The full set of black and white portraits, unveiled at Paul Smith’s Tokyo flagship store during the Company’s summer tour to Japan, are currently on display in London at Smith’s Albemarle Street shop. The dancers appear in their own practice gear or wearing the label. Images range from the candid close-up shots of Alina Cojocaru and David Makhateli, to those suggestive of movement: Roberta Marquez does an arabesque using a ladder for her barre, Johan Kobborg jumps energetically, while Federico Bonelli does a handstand against a wall. Spaces all around the House - staircases, corridors, windows - are used in a creative way to match the mood in each picture.

The Royal Ballet in Portraits is one of several recent collaborations between fashion and dance, with the V&A's current retrospective of Diaghilev's Ballets Russes serving as a historical reminder of the potential for collaboration in both worlds. Or as Steven McRae, who stars in Paul Smith's autumn-winter ad campaign in Japan, explained at the exhibition's opening party in Tokyo: "Fashion and ballet go together as well as gin and tonic. They're the perfect combination. They're both focused on the aesthetic of beautiful lines and shapes."

The Royal Ballet in Portraits can be seen at Paul Smith's n. 9 Shop (9 Albemarle Street) until 30 October.

The Ballet Bag is an online resource for the best of ballet around the web: performances, companies, dancers, interviews and other websites. With the aim to “Give Ballet a New Spin” and make it more accessible, editors Emilia and Linda write dance content, mashing it up with pop culture. They use social media to network with dance fans, companies, performers, writers, bloggers, etc. sharing what’s good, fun and interesting in the balletsphere.