The Rise and Rise of the Romantic Tenor

How one vocal experiment revolutionized operatic vocal writing, and what audiences expected from the art form's leading men. 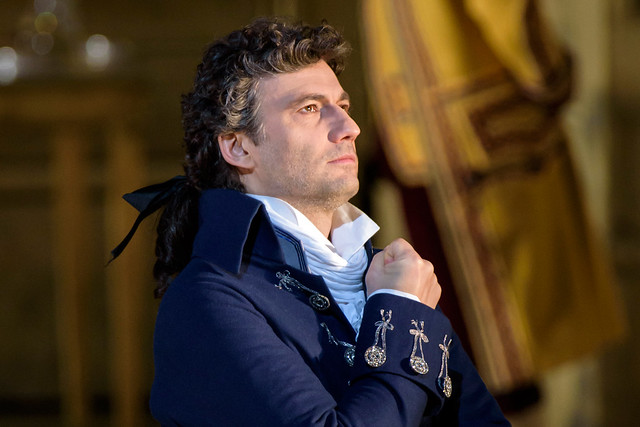 In April 1837, Gilbert-Louis Duprez made his Paris Opéra debut as Arnold in Guillaume Tell. He knew he lacked the elegant virtuosity of his predecessor in the role Adolphe Nourrit, and so decided to capitalize on his strong top register. In Arnold’s Act IV aria he stunned audiences by taking the high Cs not in a light ‘head’ voice as Rossini had intended, but in full ‘chest’ voice. The sound was allegedly not pleasant – Rossini hated it – but Duprez’s vocal experiment alerted both singers and composers to the tenor voice’s unexplored potential.

Duprez’s audience would have been used to tenors trained in the bel canto tradition, which required accomplishment in coloratura, a wide vocal range and beautiful legato. Even so, the term ‘tenor’ could embrace very different vocal qualities, ranging from high agile singing to a darker, more powerful sound. Nourrit had great vocal power but maintained the bel canto tradition of taking high notes in head voice. From 1837 he attempted to re-train in Duprez’s new ‘full-voice’ style, but wrecked his voice in the process and in 1839 committed suicide.

Others were more fortunate. The dramatic tenor Enrico Tamberlik’s ability to sing even higher than Duprez in chest voice inspired Verdi’s increasingly heroic tenor writing. It was Tamberlik who introduced the unscripted high C in Manrico’s ‘Di quella pira’ (Il trovatore); he went on to create the courageous, tortured Don Alvaro in La forza del destino. Francesco Tamagno, Verdi’s first Otello, had a still more powerful voice, which critics compared to a trumpet or even a canon. His effortless, rich high notes encouraged Verdi to compose thrilling passages such as Otello’s opening ‘Esultate!’ in Act I.

In Germany, Wagner (a great admirer of Guillaume Tell) determined to create a more ‘masculine’ and heroic performance style for his tenors. The first Wagner tenors – Josef Tichatschek, Ludwig Schnorr von Carolsfeld and Albert Niemann – were renowned for their stamina, committed acting and almost baritonal timbres. Wagner’s writing for these singers led to the evolution of the Heldentenor: a rich-toned, powerful tenor voice with strong middle and bottom registers and full top notes.

French singing has always focussed on restraint and grace, so it is not surprising that the lighter lyric tradition remained popular in France, particularly at the Opéra-Comique. Alexandre Talazac, the first Des Grieux (Manon), was renowned for his sweet timbre and his ability to sing softly. However, Duprez’s more dramatic style left its mark in France, in Berlioz roles such as Benvenuto Cellini (written for him) or Enée (Les Troyens). A few rare tenors could sing in both styles – Jean de Reszke had success as the lyrical Roméo, but his rich timbre and power also made him a great Wagner singer.

Composers in the 20th century continued to take the romantic tenor voice in new directions. Richard Strauss’s fiendishly hard tenor roles such as Bacchus in Ariadne auf Naxos and the Emperor in Die Frau ohne Schatten require the power of a Heldentenor, but also great lyrical beauty. Puccini explored the entire range of what the tenor voice could do, from the lyricism of Rodolfo in La bohème to the heroics of Calaf in Turandot. Britten’s lead tenor roles for the most part require a high, flexible voice reminiscent of bel canto, inspired by the unique vocal qualities of his partner and muse Peter Pears. By contrast, Pears’s contemporary Richard Lewis, who had a strong high register, inspired heroic tenor roles such as Achilles in Tippett’s King Priam and Troilus in Walton’s Troilus and Cressida.

Duprez’s performance as Arnold led him to be labelled a ‘revolutionary’ singer, and ‘the first modern tenor’. But even he might have been surprised by the enormous variety of romantic tenor roles and vocal types that emerged as the indirect result of his daring vocal experiment in Guillaume Tell.

Find out more about the tenor voice on the BBC’s ‘Pappano’s Classical Voices’ series.