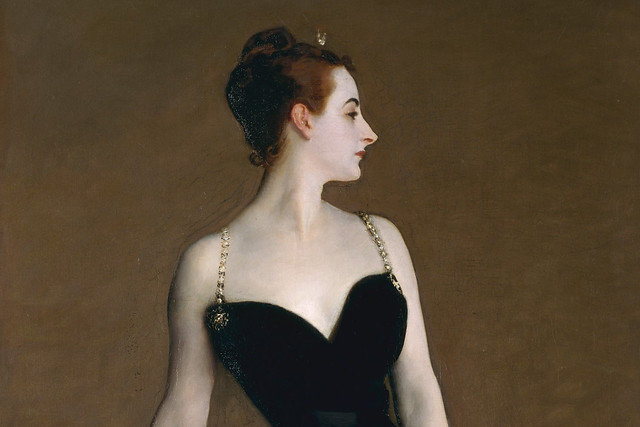 In 1881, the most celebrated beauty in all of Paris was 22-year-old Virginie Amélie Gautreau. Slender with auburn hair, luminous white skin and a distinctive aquiline nose, her presence caused riots whenever she appeared in public. ‘La Belle Americaine’, her fans shouted, alluding to the fact that the young woman who appeared to be the quintessential Parisienne was actually born in New Orleans. The newspapers were filled with detailed reports of her wardrobe triumphs.

Artists worshipped Amélie for her unconventional, almost painterly, appearance (she rouged her lips and the tips of her ears) and they bombarded her with requests to paint or sculpt her. She refused time and again because she would not entrust her image to anyone until she was sure he was capable of creating a masterpiece. Twenty-five-year-old John Singer Sargent, one of those admiring young artists (and a fellow American expatriate), made up his mind that he would be the one to win her approval.

He was counting on Dr Samuel Jean Pozzi for a recommendation. Pozzi was a respected gynaecologist, surgeon and man of the arts, but he was best known for his breathtaking beauty and insatiable appetite for sex. Sargent painted his portrait in 1881, showing the doctor in his scarlet dressing gown – one hand over his heart, the other seductively playing with the belt of his robe, as if he were about to remove it.

One of Pozzi’s conquests was Amélie, whom he called ‘Madame Gautreau of the swan’s neck’, and their affair was the worst-kept secret in Paris. Sargent watched, fascinated by these ‘brilliant creatures’, in his words. Perhaps Pozzi whispered in Amélie’s ear that Sargent was the best artist to immortalize her on canvas, because in February 1883 she agreed to sit for him.

Both the artist and his model had high ambitions for their collaboration. Sargent believed a portrait of this fabled beauty would lead to important commissions, while Amélie was certain it would greatly increase her fame. Excitement carried them through the planning stages, until reality set in: Amélie was a terrible sitter, impatient and easily distracted, and Sargent struggled with what he termed ‘the unpaintable beauty and hopeless laziness of Madame Gautreau’.

Hoping to clear his head, Sargent took a quick trip to the Netherlands with his friend and constant companion Albert de Belleroche. Sargent returned excited about a striking new pose for Amélie. He stood her next to a table, her face turned sideways to draw attention to her remarkable profile, her body pointed to the front. When the jewelled strap of her evening gown slid down, calling attention to her exquisite shoulder, he encouraged her to leave it dangling. The result was a daring portrait of a woman who appeared seductive, yet unattainable.

Sargent and Amélie were high rollers when they unveiled the painting at the 1884 Paris Salon. They were betting on fame and success, but they lost on both counts. The portrait was a resounding failure, condemned by most critics and an outraged public, who found the pose shocking and the shameless demeanour of the sitter offensive.

Sargent survived the Madame X debacle. After the Salon, he repainted Amélie’s strap to sit demurely on her shoulder and subsequently became the most popular – and the most famous – portraitist of the Gilded Age. Amélie, on the other hand, was destroyed by the scandal. First she was ridiculed – then she was ignored.

She died in 1915. That same year, Sargent sold the portrait to the Metropolitan Museum of Art in New York City. ‘I suppose’, he told the museum director, ‘it is the best thing I have done.’ Both painting and woman were works of art. But Madame X, not Amélie, proved to be the real and enduring masterpiece.

This is an edited extract from Deborah Davis’s article ‘Brilliant Creatures’, available to read in full in The Royal Ballet’s programme book for Strapless. Christopher Wheeldon’s ballet Strapless was inspired by Deborah Davis’s book Strapless: John Singer Sargent and the Fall of Madame X.

Strapless runs 18–31 May 2017 as part of a mixed programme with The Vertiginous Thrill of Exactitude, Tarantella and Symphonic Dances. Tickets are still available.

Strapless is a co-production with The Bolshoi Theatre of Russia and is given with generous philanthropic support from Kenneth and Susan Green and Mr and Mrs Edward Atkin CBE.