The Poetry of Ashton: Variety and originality in the work of The Royal Ballet’s Founder Choreographer

The ballets of Frederick Ashton share an astounding breadth of imagination. 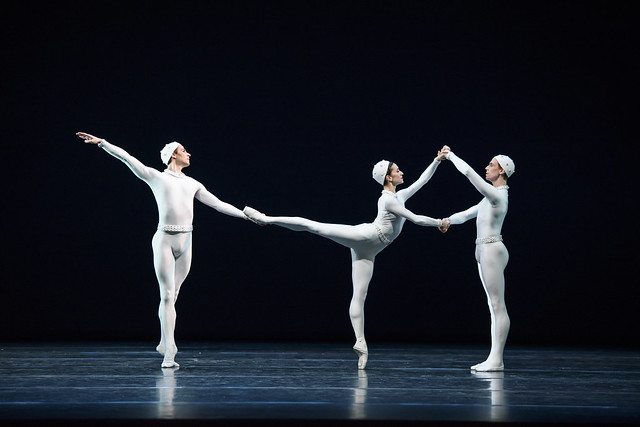 ‘Monotones’ as a title doesn’t suggest variety, and nor do the single-colour full-body costumes the dancers wear. But even in Monotones I and II, Frederick Ashton’s work is filled with vivid contrasts. The three dancers in Monotones I, clad in an earthen green, move weightily and often on their own – but the three dancers in ‘white’ Monotones II, almost always together, seem as light as air. Though similar in form, the two pieces are in many ways opposites.

There is also considerable contrast, of course, between Monotones and more or less everything else Ashton choreographed: its focus on pure movement is unique among his work. But this should come as no surprise, given the variety that exists everywhere in Ashton – while there is such thing as Ashtonian style, there is no typical Ashton ballet. Everything has its own, very distinct place.

One reason for this variety is that he was often inspired by particular dancers: Monotones II was created in 1965 for Vyvyan Lorrayne, Anthony Dowell and Robert Mead, whom Ashton biographer David Vaughan called ‘three of the Company’s purest classical dancers’. Contrastingly, Ashton created Rhapsody expressly for Mikhail Baryshnikov, a world-leading exponent of Russian virtuoso style, and the ballet is hence filled with dazzling fireworks for its male lead. Choosing Lesley Collier to dance opposite Baryshnikov is further evidence of Ashton’s fondness for contrast: steeped in Ashton’s own English tradition, Collier’s presence created a clash of balletic cultures, which set the ballet fizzing with energy.

Another ballet inspired by a particular dancer is Five Brahms Waltzes in the Manner of Isadora Duncan, although in this case the dancer in question had died almost fifty years before the ballet was created. The impact of seeing Isadora Duncan dance in 1921 never left Ashton, and this perfectly formed tribute makes clear the links between her style and Ashton’s own – though again, with its barefoot soloist sharing the stage only with a pianist, it resembles no other ballet he made.

Ashton’s narrative ballets are similarly diverse, with subjects ranging from mythology (Ondine) to 19th-century literature (A Month in the Country, based on Turgenev’s play). La Fille mal gardée takes one of the oldest repertory ballets and injects it with fresh life and wit, while Marguerite and Armand takes a story better known to opera audiences (Dumas’ La Dame aux camélias, the same novel that inspired Verdi’s La traviata) and adapts it with startling economy to a sonata by Liszt. The Two Pigeons revitalizes an old ballet’s story with a choreographic language brilliantly attuned to its original avian influences – and its internal contrasts could hardly be greater either, with the gentle tone of the first and last scenes (set in a young artist’s studio) strongly opposing the vivacious central gypsy scene.

So, what unites all these works together? Many choreographic elements, of course, form a common thread – most famously the ‘Fred Step’, which can be found in any number of his works. But, despite the superficial variety, Ashton’s ballets also share an aesthetic. In 1964, the American choreographer Merce Cunningham visited London with his company, and Ashton saw them perform Nocturnes, an abstract piece (now lost) set to piano music by Satie. It seems remarkable that so avant-garde an artist as Cunningham might have found favour with Ashton, but he was so impressed by the ballet as to recall it in his own abstract Satie ballet – Monotones II – created the following year. ‘It was poetic’, Ashton said of Cunningham’s work, ‘and I like dances to be poetic’. Style is one thing, but poetry is another.

This article has been categorised Ballet and tagged A Month in the Country, by Frederick Ashton, Five Brahms Waltzes in the Manner of Isadora Duncan, fred step, Frederick Ashton, La Fille mal gardee, Marguerite and Armand, Monotones I and II, Ondine, Rhapsody, The Two Pigeons