The myths behind the ballets: A quick guide to Sampling the Myth

Dance has long been inspired by myths and folk tales, with Deloitte Ignite offering extracts of classics and new works on one bill. 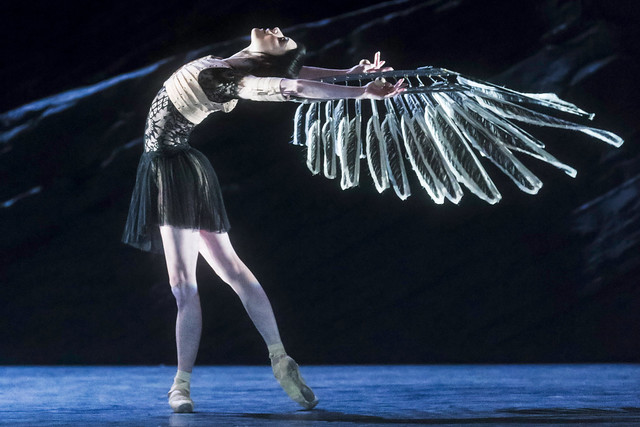 Together with a new commission from Aakash Odedra and Chris Ofili - and the premieres of three short dance films - Sampling the Myth presents excerpts from some favourite myth-influenced classical and contemporary ballets.

According to Slavic folklore, the Firebird was an enchanted, glowing bird from a faraway land that could be both a blessing and a curse to its owner. Mikhail Fokine’s ballet for Sergey Diaghilev’s Ballets Russes drew on elements from several Russian fairy tales to create an original story specifically aimed at Western audiences. In the tale, a feather from the tail of the Firebird helps Ivan Tsarevich free the Beautiful Tsarevna and defeat the evil magician Kostchei. It was the first of the choreographer’s groundbreaking collaborations with composer Igor Stravinsky, and captivated audiences with its combination of virtuoso ballet technique and naturalistic, folk-derived styles of movement. It fast became a classic of 20th-century ballet and remains a favourite of audiences around the world; it has subsequently been rechoreographed and updated by a number of artists including George Balanchine and Alexei Ratmansky, with the clip below coming from Yuri Possokhov's version for San Francisco Ballet.

The Dying Swan is based on Tennyson’s poem of the same name, which itself was influenced by Greek mythology. This solo work was created specifically for the great dancer Anna Pavlova at her request, and she reputedly performed it 4,000 times around the world. So dedicated was she to the role that her last words were apparently 'Get my Swan costume ready'. The solo is set to Camille Saint-Saëns's cello solo Le Cygne from Le Carnaval des Animaux (The Carnival of the Animals) and such is its emotional pull that Fokine described the work as ‘proof that the dance could and should satisfy not only the eye, but through the medium of the eye should penetrate the soul’. The Dying Swan has since inspired a host of different adaptations – including a recent version by Royal Ballet Artist Calvin Richardson, performed by Royal Ballet Artist Matthew Ball in the Paul Hamlyn Hall as part of Deloitte Ignite 2014.

The original source for the story of the classical ballet Swan Lake, in which a princess, cursed to transform into a swan every night, can only be freed by true and faithful love, has long been disputed. It is generally thought to be a combination of several German fairy tales, particularly Johann Karl August Musäus’s Der geraubte Schleier (The Stolen Veil), with elements of Russian folklore and a few contributions from composer Pyotr Il’yich Tchaikovsky, who wrote the music for the ballet's 1877 premiere. For his adaptation, choreographer Matthew Bourne reimagined the broad outline of the original story to create a modern tale of repression and yearning, in which the swans (traditionally female) are danced by men.

Like The Firebird, Apollo (or Apollon musagète as it was called when it was first performed in 1928) marked the start of a fruitful working partnership, in this case between composer Igor Stravinsky and Georgian-American choreographer George Balanchine. The composer both wrote the music for the ballet and conceived its scenario, in which the god Apollo leads the muses Terpsichore (dance), Calliope (poetry) and Polyhymnia (song) up Mount Parnassus. The work was a turning point for Balanchine, who returned from recent modernist experiments to his classical roots in an innovative neoclassical style that reflects the purity and unity of Stravinsky’s score.

Wayne McGregor’s Raven Girl, first performed in 2013, is based on a dark original fairy tale written and illustrated by Audrey Niffenegger (best known for her 2003 novel The Time Traveler’s Wife). The ballet tells the story of the daughter of a postman and a raven, unable to speak and unable to fly, who feels at odds with everything around her. She attempts to get wings, with disastrous results. With its combination of the everyday and the supernatural, a woman who undergoes a transformation and a saviour prince, this story recalls myths that inspired great ballets. Translating these elements into a contemporary setting, McGregor and Niffenegger’s ballet is a captivating piece of modern visual theatre.