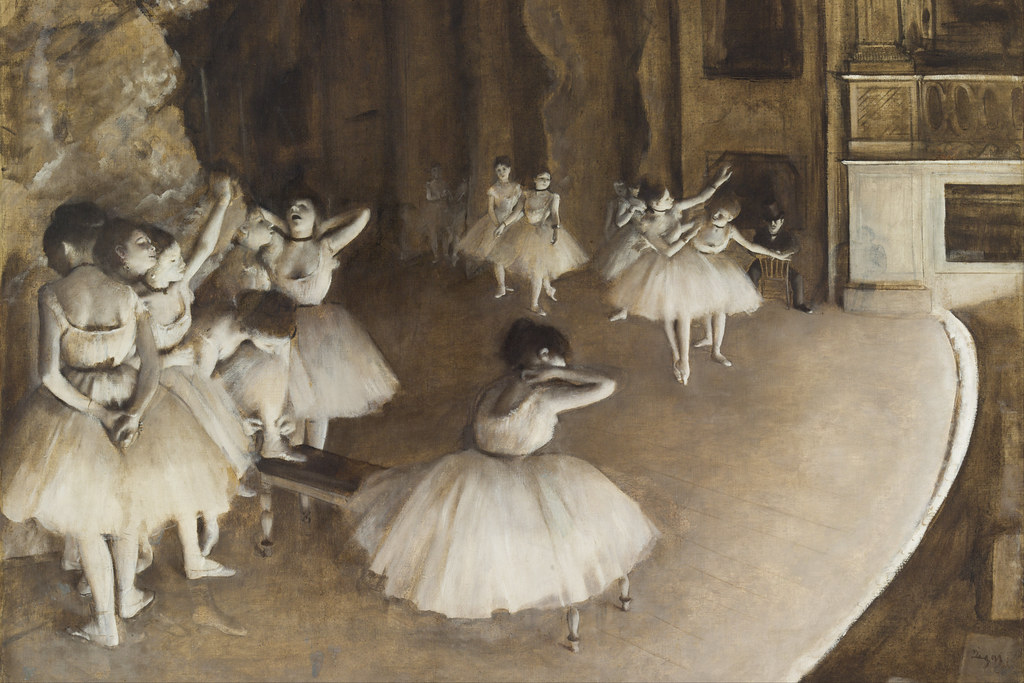 How do you capture movement in a brush stroke that will, inevitably, lie still? How do you hear music through a canvas? For centuries artists have felt compelled to try. Here are our favourite dance paintings of ballet and beyond: 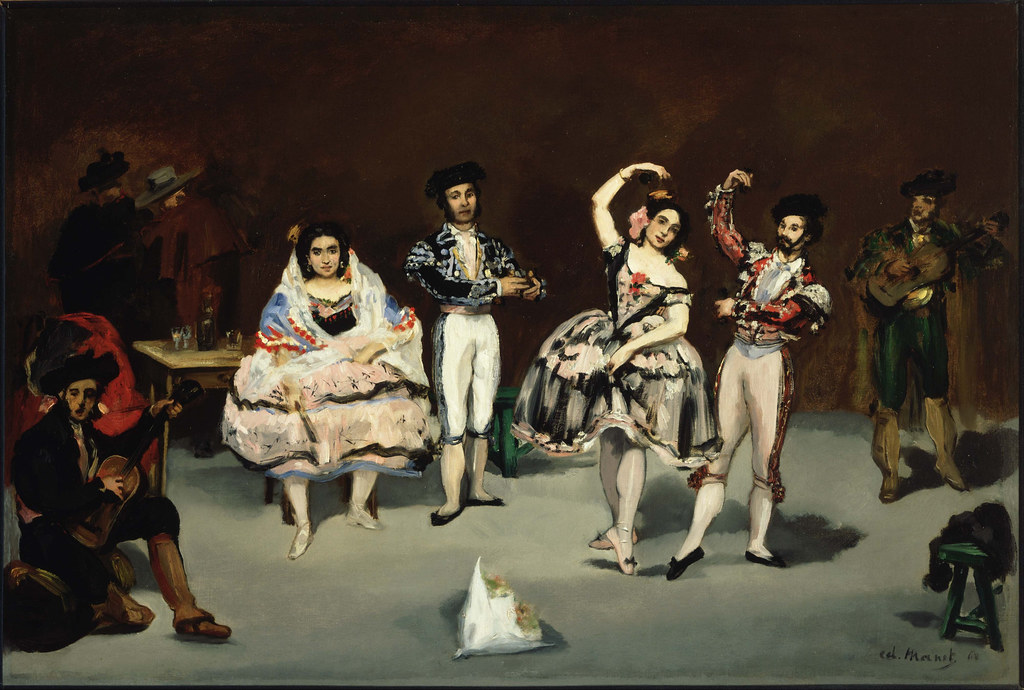 The Spanish Ballet by Édouard Manet, 1862

Édouard Manet captured Marioano Camprubi’s Royal Spanish dance troupe before a performance at the Hippodrome in Paris. The group, which included the famous dancer Lola Melea, toured Paris during 1862. 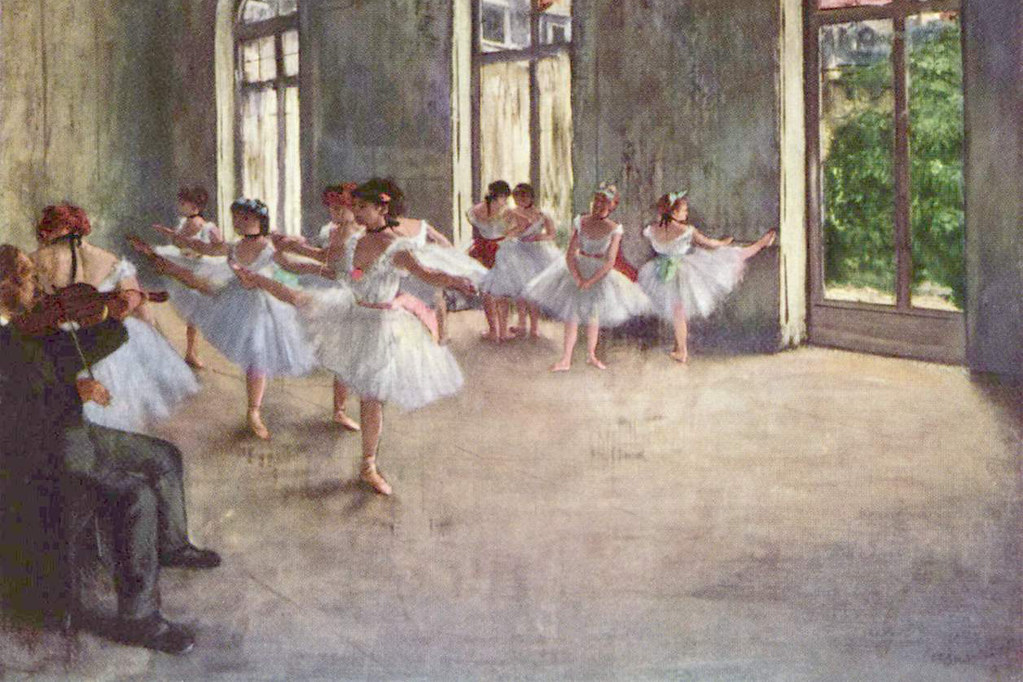 During the 1870s, Edgar Degas spent hours at the Paris Opera, chronicling rehearsals and performances and capturing intimate backstage moments – both quiet and flustered. A part of the Impressionist movement, Degas wanted to paint ‘the now’, capturing the characters of his contemporary Paris. He painted dancers true to life – strong and sweltering under layers of tulle. American Artist John Singer Sargent’s El Jaleo depicts a Spanish Gypsy dancer performing with a group of musicians and is one of his most theatrical. The enlarged shadow creates a dramatic light effect that evokes a sense of intensity at the performance. 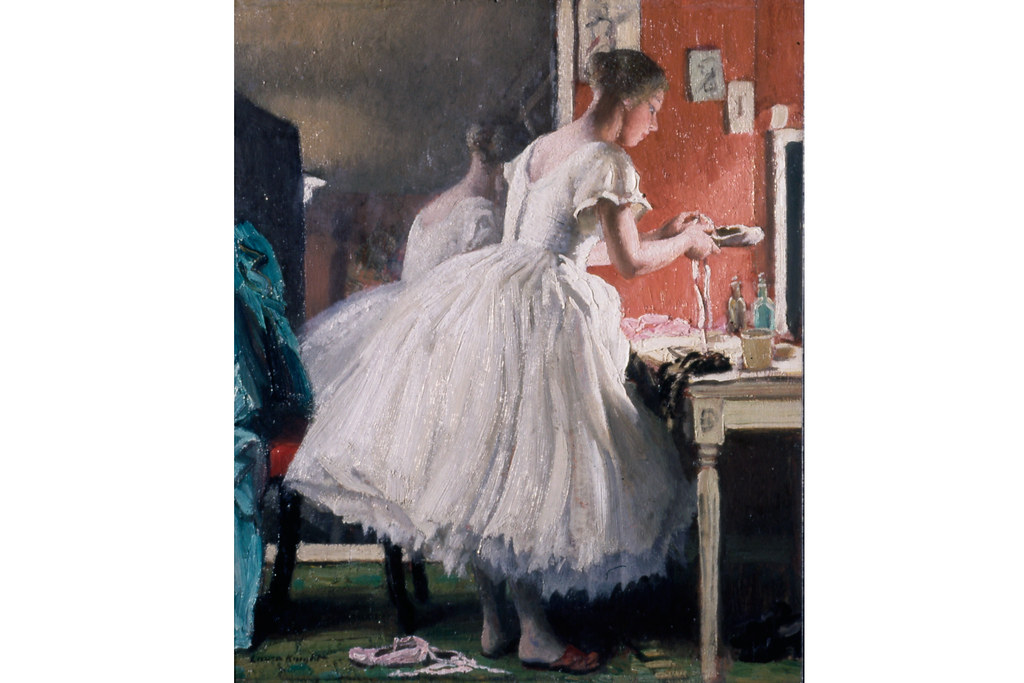 British artist Dame Laura Knight captures the Bolshoi Ballet in rehearsal at the Royal Opera House, the first time the company performed in London since the Russian Revolution.

In 1919, she chose the Russian prima ballerina Lydia Lopokova to sit for her, an image which became one of Knight's defiant images of strong women. Griselda Pollock, Professor of the Social & Critical Histories of Art at The University of Leeds, argues that Knight's portrayal of women presented a significant shift in the ways in which women were seen during the century, saying 'The trained and tuned body of the adult ballet dancer exerted a different kind of fascination for many artist-women seeking to represent the bodies of women in non-erotic but not asexual modes. The dancer shows a woman’s body as athletic, strong, creative and capable of expressing emotion by powerful movement and delicate gesture.' 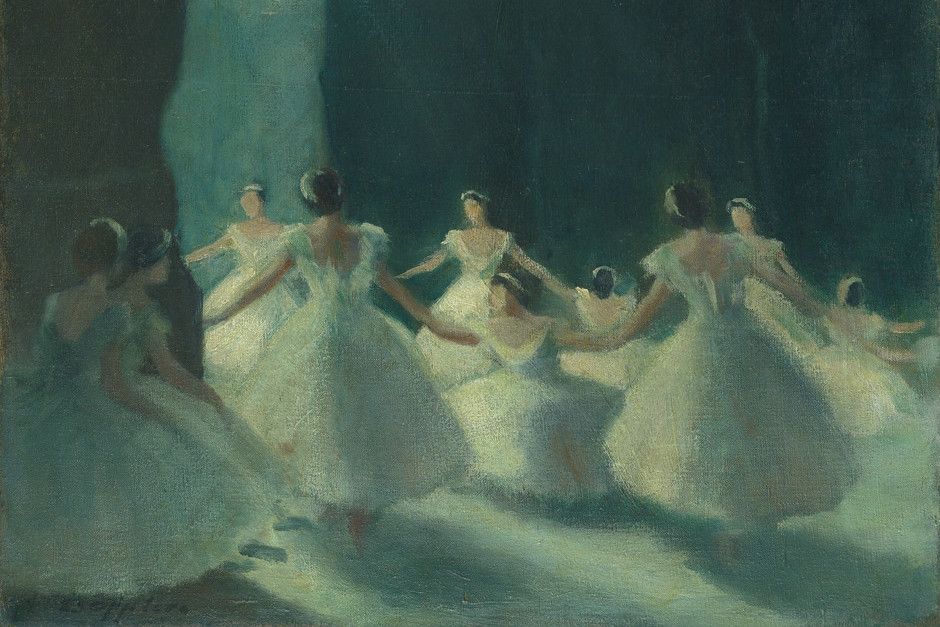 German artist Ernst Oppler created many sketches and paintings for various companies around the world. In 1912, he spent time at Covent Garden drawing ballerina Anna Pavlova. In the 1920s Oppler began depicting the Swedish Ballet as well as working on a large publication, 36 etchings ofThe Russian Ballet. 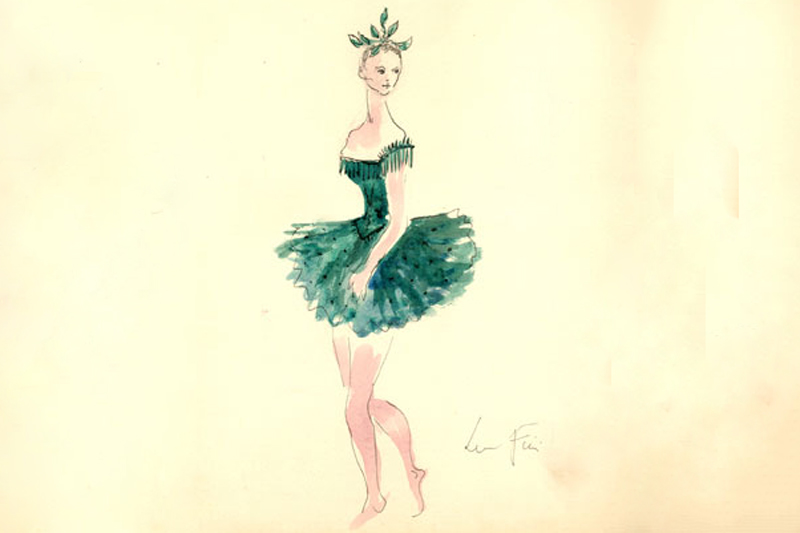 Argentine Surrealist Leonor Fini was known for her strong portrayals of women. 'Fini used her fluent and pure line to emphasize a muscular form of the dancer’s body in her work,' explains Pollock.

She designed for the Paris Opera, George Balanchine’s ballet Palais de Crystal and for Maria Callas at the La Scala theater in Milan. In 1949 Frederick Ashton choreographed a ballet conceptualized by Fini, Le Rêve de Leonor (Leonor's Dream) with music by Benjamin Britten. 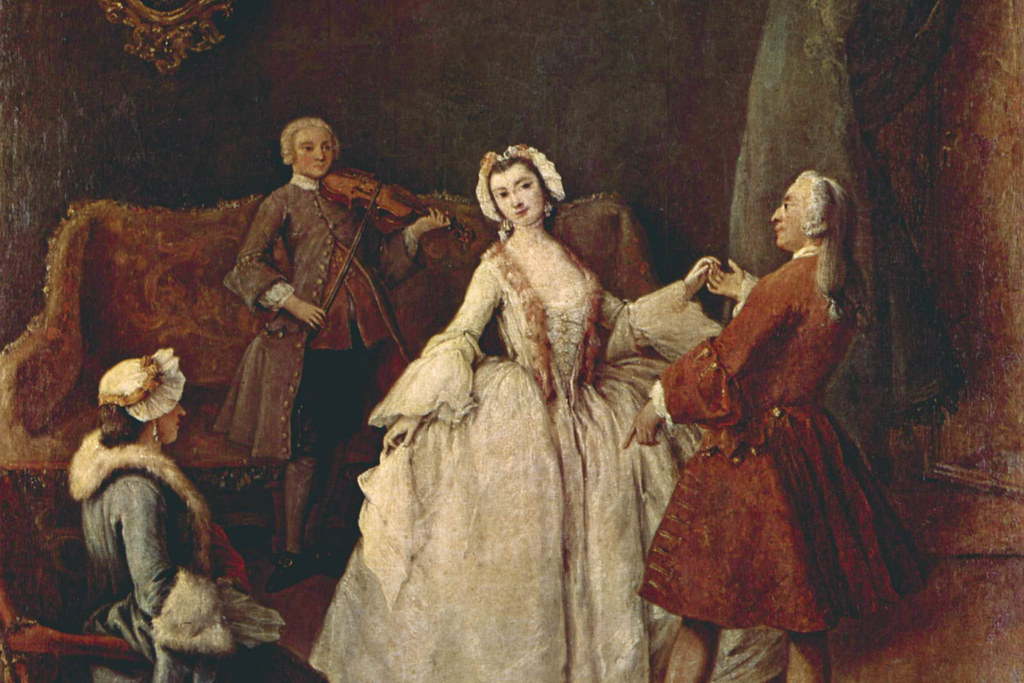 For centuries dance has been an integral part of society, a key element of ceremonies, rituals and celebrations in all cultures. Jane Austen writes in Pride and Prejudice: ‘To be fond of dancing was a certain step towards falling in love’. The dance scenes in her novel are pivotal for the love to bloom, where couples could snatch intimate moments and enact longing gazes across crowded rooms. Pietro Longhi’s The Dancing Lesson shows a young girl practising dancing in preparation to attend such social occasions. 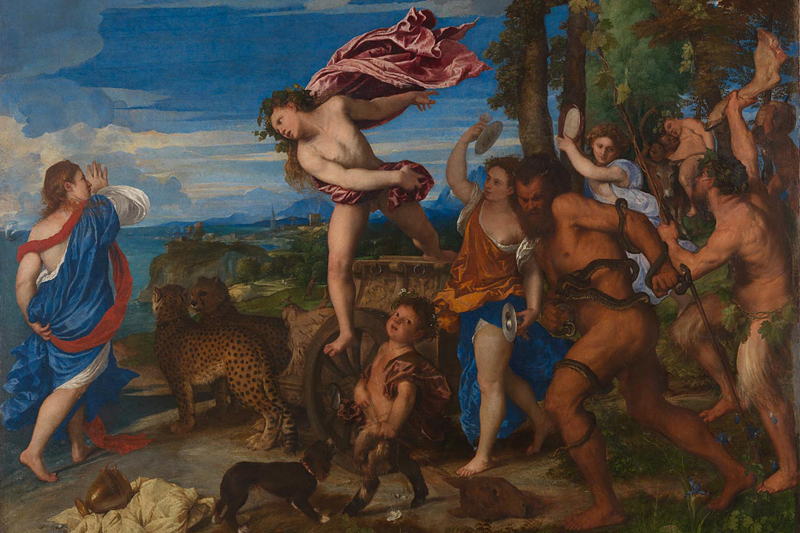 Titian, Bacchus and Ariadne, about 1520-3 © The National Gallery, London

Painting also captures dance in a broader sense, as a key part of the language of being human. Dr Minna Moore Ede, Associate Curator (Renaissance Painting) at The National Gallery, explains that 'Paintings can be full of movement and dance even if this is not their subject. Take Titian’s Bacchus and Ariadne for example, in which Bacchus leaps most balletically out of his chariot, having fallen in love with Ariadne on sight, followed by his retinue of drunken, dancing revellers.’ 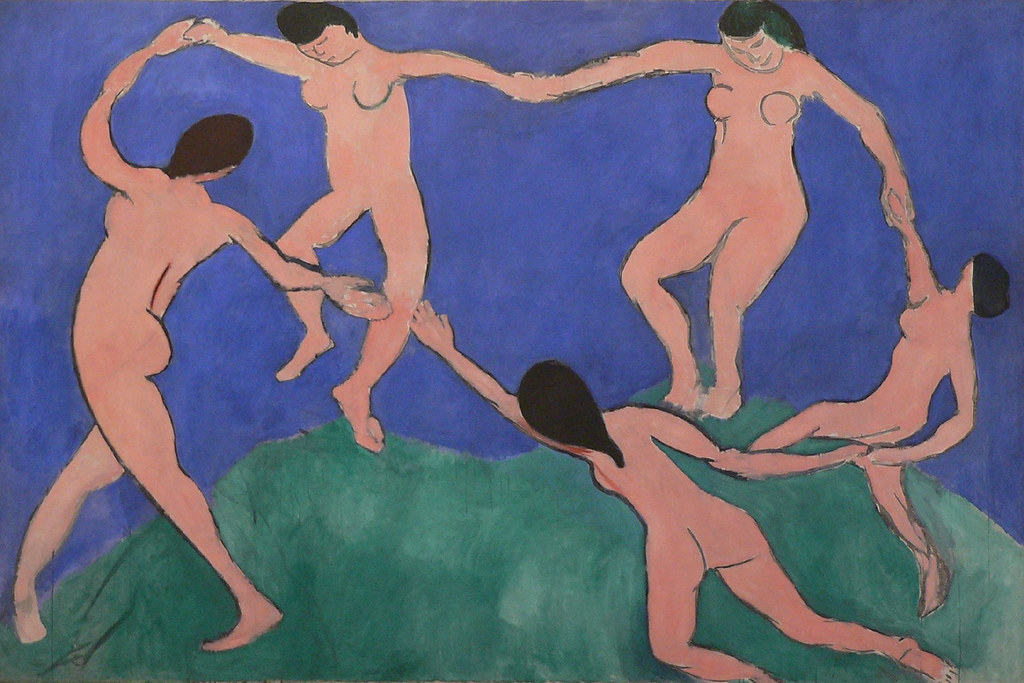 The human impulse to dance has been distilled by many artists throughout time. Take Henri Matisse’s La danse (1909) Despite its simplicity, there is a rhythm implied through the continuous succession of the figures, which evoke a sense of the liberating effects of dance. 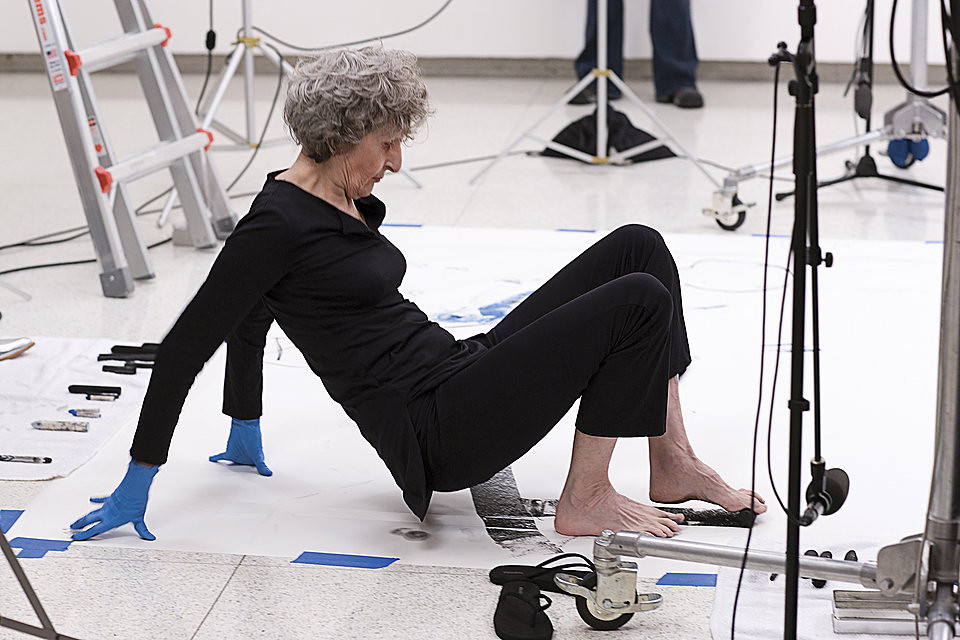 Taking dance paintings to new mediums is choreographer and artist Trisha Brown. Brown creates work as performance, using her body to create the painting. In this way, her artwork embodies dancing as its subject and inception. Above she performs her work Proscenium Works 1979–2011 in 2014.