The man behind the Meistersinger: Who was the real Hans Sachs?

Wagner's operatic hero actually existed, and his Monty Python-esque works range from the bawdy to the poignant. 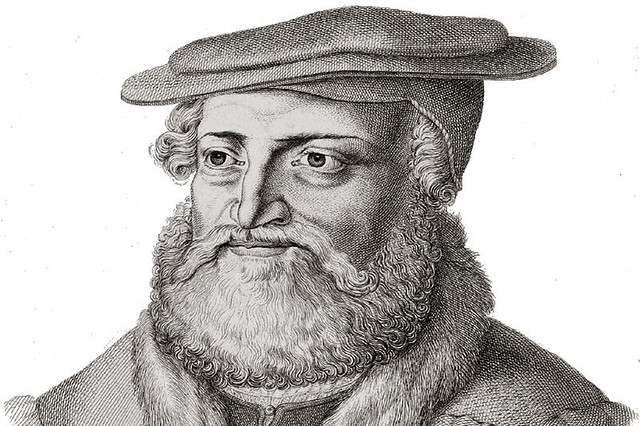 In 2002 I was travelling through Germany and landed up in Rothenburg ob der Tauber, a wood-framed medieval town in Bavaria that miraculously survived World War II. The town celebrates its past with a season of Festival plays written by the 16th-century cobbler and Meistersinger Hans Sachs – the hero of Wagner’s operatic comedy Die Meistersinger von Nürnberg. The night I was there the Town Hall was advertising Sachs’s play Das böse Weib (The Shrewish Wife). It was a great piece, nothing but fisticuffs, bad jokes and political incorrectness. I came back to London resolved to look into the entire Sachs output – and one glance at the British Library catalogue told me the thing was impossible.

Sachs himself estimated that he wrote 4,275 works – tales, farces, poems, plays and songs. His dramatic works alone include 61 tragedies, 65 comedies and 85 Festival plays. (When did he ever find time to cobble?) The show I’d seen was a Carnival play, which explained its knockabout humour. It would have been played to an uproarious crowd and was stuffed with local jokes, local quarrels and local people. Looking through some other Carnival plays, I felt that, though perhaps they relied a little too heavily on the comic possibilities of horse piss, you couldn’t get over the novelty, the sheer freshness of Sachs’s invention.

As I leafed through the plays I was struck by the almost Monty Python-esque humour. The situations may be late medieval, the casts made up of wandering friars, horse thieves, dim-witted peasants and suicidal calves (always falling down wells), but the storyline is cloud cuckoo land. There’s the peasant who climbs a tree and manages to knock his head off. His friends gather round the corpse. ‘Where’s Hans put his head?’, says one. ‘Was he wearing his head this morning?’, asks another. His wife is totally baffled. ‘Well’, she says, ‘I washed his hair last Sunday, he certainly had it then.’ Hans is followed by the peasant who – having lost yet another calf – determines to hatch a new one by sitting on a round of cheese. He spends the whole play clucking.

But the undertow of these plays is generous. What do you do when your wife beats you up? When your husband is so stupid that he lets a neighbour sell him his own pig? Nothing, apparently. The rogues usually win. But only superficially. These plays are for Carnival time, the one time of year when you forget what a pest your neighbour is and have a drink with him. All Sachs’s play end with a cheerful admonition to accept life as it is, as you ‘pile the sausages up in stacks/And drink some wine with good Hans Sachs’. It’s on a less exalted plane than Die Meistersinger von Nürnberg, but recognizably the same world.

Sachs wrote thousands of mastersongs – mostly on sacred subjects – other Lieds and metrical psalms. He was a member of the Nuremberg Mastersingers’ guild and his name is on the list Wagner used for the famous roll call of Masters in Act I. The government was oligarchic and – unusually for its time – deeply antipathetic to trade guilds. Yet they rated their Mastersingers and Sachs himself was honoured by his contemporaries.

And it’s in this sense that Sachs was the real thing, the ordinary German artist that was so dear to the German Romantics. Goethe never lost his admiration for Sachs after reading his lyrics as a preparation for Faust. ‘Hans Sachs’, he wrote, ‘was a true master-poet… a genuine talent… and a simple-minded middle-class person, which is what also I boasted of being.’ His poem on Sachs begins with the master in his cobbler’s shop, surrounded by the tools of his trade one fine Sunday morning: for all the world like the opening of Act III of Die Meistersinger.

The production is a co-production with National Centre for Performing Arts, Beijing, and Opera Australia and is given with generous philanthropic support from Mrs Susan A. Olde OBE, Dr Genevieve Davies, Mrs Aline Foriel-Destezet, Maggie Copus, Peter and Fiona Espenhahn, Malcolm Herring, The Metherell Family, Die Meistersinger Production Syndicate and the Wagner Circle.