Share the joy in ZooNation’s infectious, hip-hop celebration of embracing all the things that make us who we are. 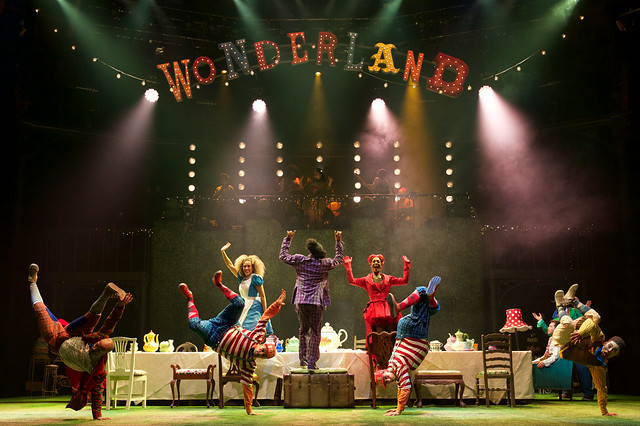 Young psychotherapist Ernest is having a tough time. He’s just started his first job, at Ladrington Brook, the Institution for Extremely Normal Behaviour. He’s very well qualified – he even has a PhD in how to be normal – but the clients in his ward aren’t having any of it, and by the end of Act I of ZooNation’s The Mad Hatter’s Tea Party Ernest has been driven to his wits’ end. But that’s when the party starts.

In The Mad Hatter’s Tea Party, director Kate Prince and the dancers of ZooNation Dance Company respond to Lewis Carroll’s Alice’s Adventures in Wonderland in a new and distinctly 21st-century way. Prince imagines what would happen if the characters were taken out of Wonderland and placed in our world. Would we accept them, or would we try and change them and make them fit in? By creating backstories for each of the characters, Prince and ZooNation’s dancers explore what it means to be ‘normal’ – and whether that’s important.

The role of Ernest was created by acclaimed street dancer Tommy Franzen, a hip-hop virtuoso. His role in the story is to represent the well-meaning establishment. We follow his character arc over the first act as he is torn between what he believes he should do, and what he growingly feels is the right thing as he gets to know the characters around him and where they’ve come from. He explodes at the end of the act into a phenomenal breakdancing solo, the effect of all the different tensions that have been building up within him. It’s a fantastic closing set piece, but the audience knows his story isn’t finished.

In Act II the Wonderland cast has transformed the dingy ward into a raucous tea party, presided over by the Mad Hatter – a role created by Isaac ‘Turbo’ Baptiste, a dancer of irrepressible and infectious energy. He and his comrades have come to care for Ernest, and are concerned as he now sits slumped and worn out on the sidelines of their party. How to cheer him up and get him back on his feet?

They’re helped by DJ Walde and Josh Cohen’s zinging upbeat score and their infectious song ‘Find your groove’. After an opening ensemble to greet the audience back from the interval, the Mad Hatter turns his sights on Ernest, pulling him gently onto the dance table. After guiding him through some moves (shared in perfect synchronicity) Ernest slowly builds the strength to dance on his own – just as spectacular as his solo from the end of Act I, but now bursting with optimism and the sheer joy of dancing.

That joy runs through the core of the rest of The Mad Hatter’s Tea Party. Dancers and musicians astonish us with their skills but also invite us to join in, in an inclusive and heart-warming celebration of not only the power of dance to change our mood, but of the importance of accepting ourselves – and all the things that make us who we are.

The Mad Hatter’s Tea Party runs at the Roundhouse until 22 January 2017. Tickets are still available.