The Importance of Being Earnest Musical Highlight: ‘And this is what you call Bunburying?!’ 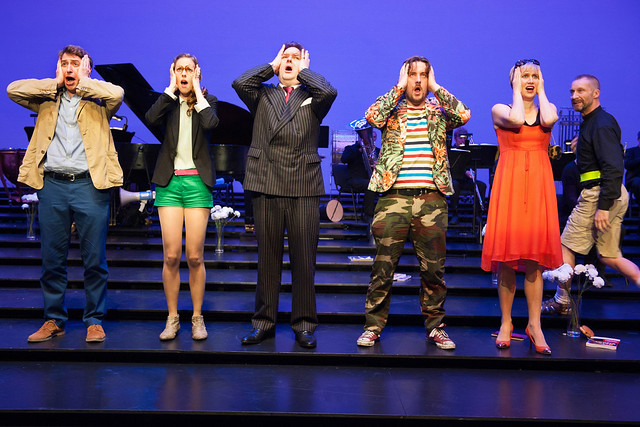 How do you turn a play into an opera? Even worse, how do you do this to one of the most popular plays ever? Perhaps the key is to go your own way with it, to be unafraid to tear up the rulebook and smash the plates of convention. That’s what Gerald Barry did in The Importance of Being Earnest. Take a typical example.

Act II is almost over. Jack and Algernon, after initially successful proposals to Gwendolen and Cecily, find themselves at a loss: the women have discovered that neither of them is called Ernest – something they simply cannot accept. What’s more, Gwendolen’s mother, the Germanophile Lady Bracknell, opposes Jack’s proposal as strongly as she admires the poetry of Schiller. What is left to do, but eat muffins?

That’s what Algernon thinks. Jack, on the other hand, finds Algernon’s eating of muffins heartless, given the seriousness of the situation. To the oddly serene strains of Auld Lang Syne, picked out on the flute, the two men debate the appropriateness of muffin-eating. Violent orchestral interjections remind us that Jack is stressed, and so does his highly-strung cry of ‘I wish you would go!’.

The two thwarted fiancés come close to a serious conversation when they compare the times at which they are to be christened Ernest. ‘We can't both be christened Ernest. It’s absurd’, observes Jack. But, with appropriate absurdness, Algernon steers the conversation back to muffins. The musical climax of this brief scene comes with Jack’s explosive revelation of his hatred for tea-cake, which prompts a shrill orchestral outburst reminiscent of Bernard Herrmann’s Psycho soundtrack. As the eating continues, the orchestra seems to go mad. The act ends.

Jack and Algernon’s muffin banter encapsulates something key about Barry’s approach to adapting Wilde. The opera has Wilde’s brilliant wit at its heart, but Barry twists it about in the very strangest of ways. In Wilde’s original version of this scene, for instance, food is only a secondary concern: more significantly, Jack and Algernon try to dissuade each other from pursuing their proposals and christenings. Barry, though, cuts most of this material, and places muffins centre-stage.

The scene is also typical in its obsessive use of Auld Lang Syne, which crops up time and again in the opera – a great many of the characters sing it at one time or another. It also functions as a kind of overture, in an idiosyncratic piano version pre-recorded by Barry himself. Its cheerful white-note melody is sometimes a kind of respite from the orchestra’s frequent aggressive outbursts, but overall its meaning is difficult to pin down.

Very much like the opera's overemphasis on food, Barry’s use of Auld Lang Syne throws Wilde’s play into a strange new light. The familiar is turned into the thoroughly weird.

The Importance of Being Earnest runs 29 March–3 April 2016. Tickets are still available through the Royal Opera House and Barbican websites.

The production will be live-streamed on the ROH YouTube channel on 2 April 2016.