The Fight to the Stage: Donizetti and censorship

Maria Stuarda wasn't the only of the composer's operas to raise official hackles. 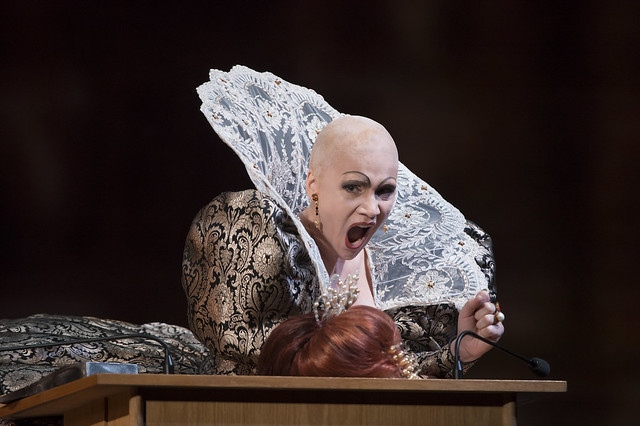 There is a much-repeated backstage line: a bad dress rehearsal means a good first night. True, it is usually spoken more in hope than expectation. But can the reverse be true? What if it was a really good dress rehearsal? Donizetti found out the hard way in Naples in 1834, where he was about to have the premiere of his opera Maria Stuarda. It wasn't the first time – and nor would it be the last – that Donizetti fell foul of the Neapolitan censors.

Maria Stuarda's dress rehearsal went exceptionally well, what Donizetti called ‘a fanatical success’. The whole show had been commissioned, written, checked by the official censor who approved it with a few changes, and everything was made ready for the premiere. But just a day or so after, the bombshell dropped: the King refused permission for the opera to be performed.

The reason for the ban was never explained – but we can speculate. It may well have been because the opera includes a scene in which Mary receives confession and absolution. Presenting religious rites and even religious figures is a running theme in the censoring of opera in Italy in the 19th century. But equally it could have been because the first performance was intended to be a Royal Gala and the King had previously forbidden serious subjects for Royal Galas. Whatever the cause the result was the same: all that effort and money and time, but no premiere.

A year earlier, the premiere of Donizetti’s Lucrezia Borgia in Milan had been a triumph, but such success did not mean it would automatically be fine for Naples. One of the censors there was so horrified by it that he protested about it to the police, stating that ‘it ends with the death of six individuals, five of whom are poisoned at one table, where they have been enticed by the blackest perfidy disguised as polite and chivalrous hospitality’. So, not just a dangerous example of treachery among the ruling classes, but an appalling breach of manners.

Donizetti had written Pia de’ Tolomei for Venice, where it was performed in 1837; for Naples in 1838 it had to be revised to accommodate the censors’ demands. The same year, Donizetti must have felt Maria's history was repeating itself in the Naples rehearsals for his new opera Poliuto. This was based on Corneille’s play on the life of the Christian martyr St Polyeuctus and had already been approved by the official censor. But the King of Naples is reported to have said ‘Let’s leave the saints in the calendar and not put them on the stage’. And that was that.

It's no wonder that Donizetti’s next move was away from Italy to the less restrictive, more glamorous international sphere of Paris, where he arrived more than ready to turn Poliuto into a French grand opera, Les Martyrs.

By 1843, Donizetti’s success was international and his operas acclaimed. But he still had to worry about the censors for his Caterina Cornaro, written that year for Naples – even over such details as whether the censors would allow one character to wear a Maltese cross.

Of course, Naples was not the only Italian city with irritatingly intrusive censors. In a Catholic country, suicide is a mortal sin, and so was an action that could not be presented on stage anywhere in the country. As a result, Donizetti found himself required to ensure that Maria Padilla, the title role of his 1841 opera for Milan, should die at the end of the opera not through suicide but ‘of joy’.

Just as with Giuseppe Verdi, the censorship Donizetti faced in Italy was a crucial factor in shaping the works he created. The concerns of those Italian censors are not ours, yet the effects of their preoccupations remain in so many works as we know them today.

The production is a co-production with Polish National Opera, Théâtre des Champs-Elysées, Paris, and Gran Teatre del Liceu, Barcelona, and is given with generous philanthropic support from Lord and Lady Laidlaw, Susan and John Singer and Michael Hartnall.