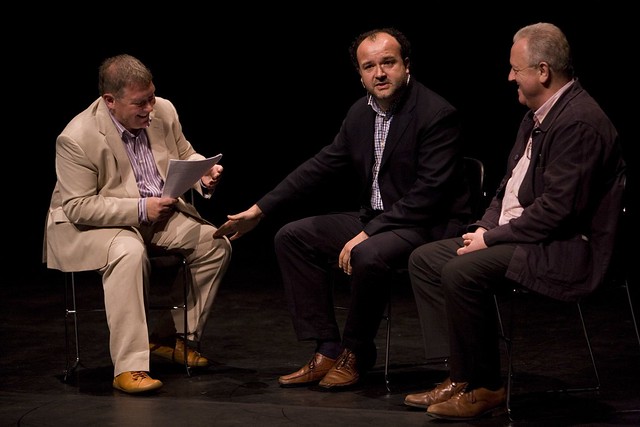 Later this month, Chorus Director Renato Balsadonna will take to the pit of the Royal Opera House for the first time, to conduct two performances of Giuseppe Verdi’s I due Foscari with the legendary Plácido Domingo in the lead role. ‘I’m extremely, extremely excited,’ Balsadonna reveals in the lead-up to an orchestral debut that is packed with personal resonance. ‘For a very fortunate coincidence, it’s a Verdi opera about Venice – the place in Italy where I come from – so there are a lot of references that are very close to me.’

It’s not the first time that the musician has worked on Verdi’s sixth opera, having done so in his previous role at La Monnaie in Brussels. ‘I come back to this score with new eyes, new ears, new ideas, and a new sensibility’. Having done so, he has rediscovered the ‘deep humanity’ and ‘extraordinary dark colour’ of the opera.

‘We can say that this dark colour comes because Verdi was going through a particularly dark period of his life.’ Balsadonna explains how the composer’s wife and two children had died a few years earlier. ‘But a big part of the opera takes place at the palace of the Doge [the ruler of Venice], and of course the austerity, even the oppression, of that big palace is something that is very characteristic’.

Such darkness is reflected, continues Balsadonna, through Verdi’s clever use of musical themes, a first for the Italian composer. The Doge’s music, for example, is ‘very serene, very calm, like a chorale played by cellos, divided. But on that chorale we have a line of viola that gives you a feeling that there is anxiety and trouble in this man’. The story focuses on the Doge’s realization that there is nothing he can do to protect his family.

His son, Jacopo, too has a ‘beautiful theme in G minor’ with ‘a beautiful solo of the clarinet, very poetic, very melancholic’. And every time Jacopo’s wife, Lucrezia, comes on stage – a ‘fiery’ woman who is ‘extremely outspoken and not afraid of anything’ – the tempo of the music increases to an ‘agitato’.

For Balsadonna, I due Foscari is full of the lyrical and powerful music that is characteristic of the many operas by the Italian composer. ‘Verdi was a man of theatre,’ he concludes, ‘and he knew how to create drama with music’.

I due Foscari runs 14 October–2 November 2014. Renato Balsadonna will conduct on 30 October and 2 November. Tickets are still available.

The production is a co-production with Los Angeles Opera, Palau de les Arts Reina Sofía, Valencia, and Theater an der Wien and is given with generous philanthropic support from Mrs Aline Foriel-Destezet, Mrs Susan A. Olde OBE, Colm and Ella Kelleher, Costas and Evi Kaplanis, and Mrs Philip Kan.

This article has been categorised Opera and tagged by Giuseppe Verdi, by Thaddeus Strassberger, conductor, I due Foscari, Renato Balsadonna, The Royal Opera