The Dance of Death: In art, ballet can be very bad for your health

The association between dancing and death stretches well beyond Hilarion's horrifying demise in Giselle. 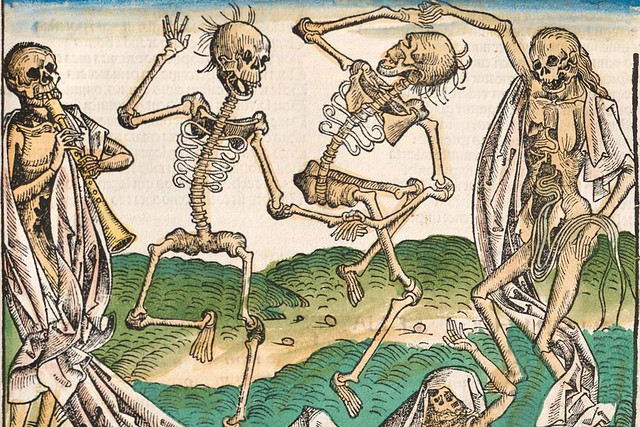 From some of the evidence available – at least in the arts – dancing can be very bad for your health (and often fatal). Occasionally it's self-induced: the Chosen One in The Rite of Spring has the honour of sacrificing his or her own life, pushing beyond the body’s physical limits at the ecstatic climax to collapse in death.

Death through dance is transcendent for a willing sacrifice, but not a victim. In Hans Christian Andersen’s fairytale The Red Shoes, a vain girl puts her obsession with a pair of shiny red shoes before her devotion to God. The shoes develop a life of their own, forcing her to dance without stopping. She even has her feet cut off – but still the shoes keep on dancing and only when she prays sincerely for forgiveness do they stop. The message is clear: God first, Manolo Blahniks second. But it is a psychological twist rather than a moral lesson in the film The Red Shoes, about a company performing a ballet based on Andersen’s tale. The prima ballerina – played by Moira Shearer, who danced with Sadler’s Wells Ballet (later The Royal Ballet) – is torn between jealous rivals for her love. As the strains become unbearable, the red shoes of her on-stage ballet character seem to dance her off stage, out of the theatre and straight under a train. Was it suicide, or the shoes bringing fiction into life? Michael Powell (co-director with Emeric Pressburger) relished the ambiguity.

A similar destructive blurring of fantasy and reality in a ballerina’s mind brings death in Black Swan, with Natalie Portman's character Nina Sayers dancing the whole last act while fatally wounded. Sometimes, though, the ending is not entirely bleak. Heinrich Heine described a German folktale in which the spirits of vengeful women cause men to dance themselves to death, and this became the spur for Giselle. Two men are thus challenged – Hilarion is forced to dance himself to death, but Albrecht is saved by the spirit of his dead love.

The inevitability of these fatal endings stems from an association of dance and death that goes back some 1,500 years, if not longer. The skull-headed death figure leading mortals in a dance to hell was a long-standing representation of the mortality of all humans. That deep association re-emerged in the Gothic Romanticism of the 1800s with two musical ideas: the plainchant theme of the Dies irae from the Mass for the Dead, widely quoted in wild dances to suggest mortality (and later used in the opening credits of The Shining); and the tarantella, (wrongly) associated with a supposed cure for spider bite through energetic dancing. Such fatal hysteria and destructive energy appealed to the Romantic musical mind – composers latched on to its furious pace and seemingly perpetual fast, triplet melodies to evoke life-threatening frenzy.

Death seems to go in three-time – as in the Devil’s violin of Camille Saint-Saëns's Danse macabre (familiar to many as the theme to 'Jonathan Creek'). By the early 1900s an air of decay and death also lingered around the waltz. The saturated atmosphere of Maurice Ravel’s La Valse has often drawn associations with the spirit of its age – the aftermath of World War I – and the relentless ratcheting up of this whirling musical melée has widely been taken to suggest decadence leading to utter collapse. At the end of Ashton’s ballet to Ravel’s score the curtain closes on dancers still in motion. Should we think they are also condemned to dance till they drop?

Which dances to the death send a shiver down your spine?

Leave a reply to Dana · Cancel