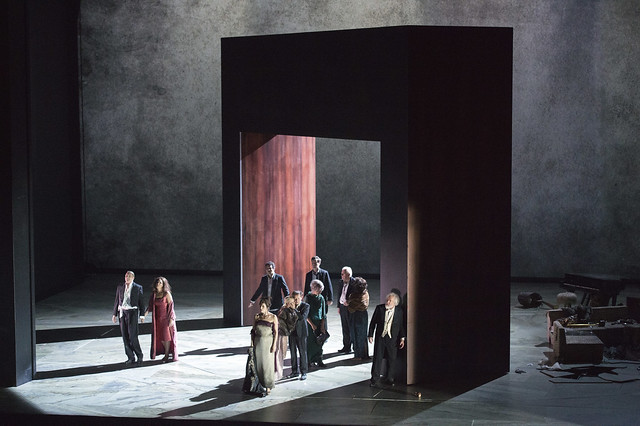 Luis Buñuel’s film The Exterminating Angel poses one or two challenges to those adapting it into an opera. It takes place almost entirely in a single room. It has a huge cast, most of whom are on-set throughout. There are live animals: a flock of sheep, a bear. We’re also well within Buñuel’s Surrealist world: at night a disembodied hand creeps about, while one character flies bat-like towards a slumbering neighbour. And yet Thomas Adès’s universally acclaimed new opera adaptation takes on those challenges and obliterates them. How did his stage team make a reality of Buñuel’s nightmare?

Director Tom Cairns has a special relationship with the opera: by the time he came to direct the premiere he was already an integral part of the opera’s creation, having written the libretto from Buñuel and Luis Alcoriza’s screenplay. He says he and regular collaborator Hildegard Bechtler, who designed the sets and costumes for the opera, slowly felt their way into its peculiar world: starting with the room, in which the characters mysteriously find themselves trapped, unable to leave even though the doors are wide open.

‘Rooms can be realistic or abstract’, says Cairns, ‘but whatever way you do that room it’s essentially going to be viewed from a wide shot for the whole piece, when you’re in the auditorium. We felt that could become exhausting for the audience. We thought it would be more interesting if the room becomes something that takes the audience on a journey’. Bechtler adds, ‘I sensed you wanted something much bigger in your statement, and at the same time much simpler than four walls’.

Their solution was to reduce the room to three elements, as Bechtler explains: ‘There’s a very sculpted 60s gold wall, which has everything we need in it. We’ve got another wooden wall, a real wall. And then we’ve got our arch’. This huge arch towers over the cast, and can move independently around the stage. ‘I was caught up in how to pull focus, how do you make the audience see what you need them to see’, says Cairns. ‘So we had this idea of the slightly shifting, moving stage picture, where instead of the camera going into a close-up as it would do in a film, we bring the set to the audience.’

More than a means of pulling focus, the arch becomes a character in its own right. ‘The arch is threshold, frontier and unexpected window’, says Bechtler; ‘we make that arch move, like its own force’. Cairns explains, ‘The exterminating angel, whatever this force is, is not literally about moving from one room to the next room – it’s a force that’s everywhere. And so the idea that whatever was forming the line, the threshold, that they couldn’t cross could be anywhere made perfect sense’.

The story tracks the rapid degradation of the characters’ social norms as their imprisonment continues. The designs intensify this decline. ‘In the beginning it’s a fairly intact living space’, says Bechtler, ‘but it unravels with the characters’. Cairns goes on: ‘Whatever were their bourgeois accoutrements have literally disappeared. By the end you’re not concerned any more with lamps and carpets and curtains and sofas: it’s just the threshold and not being able to go through it, in this emptiness, this barren landscape.’

The Surrealist gestures of Buñuel’s original are essential stepping stones towards the apocalyptic end. ‘They take the piece into the very strangest recesses of all our minds’, says Cairns. ‘In the end it becomes a much more emotional space than just a room which has been destroyed because people have been hacking into the walls. By the third act I hope we’ve taken the audience into utter dereliction – global dereliction, not just domestic dereliction.’ ‘The décor of the way the characters lived and the way they behaved is stripped away’, says Bechtler. ‘It’s a very primitive picture. At the premiere people felt it was quite a relevant moment to have this opera in today’s climate.’

The Exterminating Angel runs until 8 May 2017. Tickets are still available.

The production is a co-commission and co-production with Salzburg Festival, the Metropolitan Opera, New York, and the Royal Danish Opera, and is given with generous philanthropic support from Stefan Sten Olsson, The John S. Cohen Foundation and The Boltini Trust.