The A-Z of Richard Strauss: N is for Nazi

Strauss was president of the Nazi's music bureau but to what extent did he support Hitler? 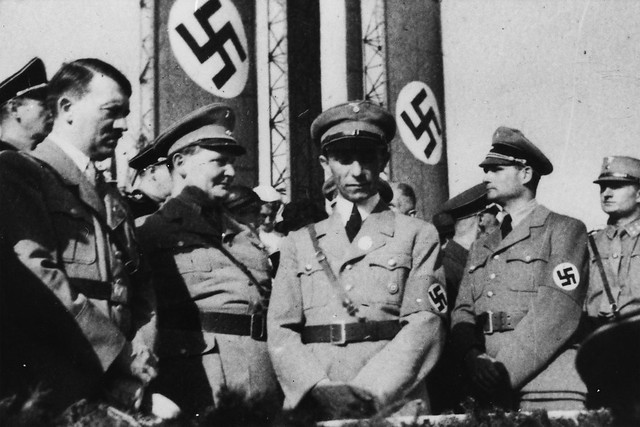 Adolf Hitler and leading figures of the Nazi Party. Richard Strauss was President of the Reichsmusikkammer. Author Unknown.

It is impossible to separate Richard Strauss from his Nazi associations.

While the music of many of his high-modernist and Jewish peers such as Alban Berg, Arnold Schoenberg and Igor Stravinsky was banned throughout the Reich (from 1933 in Germany and from 1938 in Austria) Strauss was appointed president of the Reichsmusikkammer, the state-run Nazi music bureau which promoted 'good German music' and suppressed 'degenerate' music including jazz, pop and atonal works.

Strauss used his position to improve the copyright situation for him and fellow German composers, yet he also had to kowtow to the party. Unfortunately, Strauss was often unable to differentiate between his and the common good and made palpable errors in judgment during the Nazi period, though it is essential to note that he was never a wholehearted adherent of the regime nor was he an anti-Semite. He often flouted party rule, including its insistence on everyone calling Hitler ‘der Führer’, but then promptly composed the Olympische Hymne for the 1936 Berlin Olympics. By doing so, Strauss hoped to curry favour with the authorities in a fight to keep Alice, his Jewish daughter-in-law, and his grandchildren safe, though he was sadly unable to save many of Alice’s family.

At the end of War, when Strauss began to grasp the full horror of what had unfolded under the Nazis between 1933 and 1945, he wrote down his thoughts: ‘From 1 May [1945] onwards, the most terrible period of human history came to an end, the 12-year reign of bestiality, ignorance and anti-culture under the greatest criminals, during which Germany’s 2,000 years of cultural evolution met its doom.’