The entire short work is a highlight in George Balanchine’s exuberant and demanding pas de deux, set to rediscovered music by Tchaikovsky. 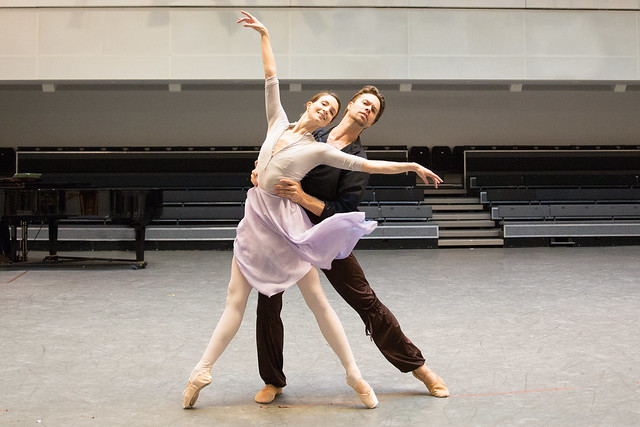 In 1953, a long-lost musical score was discovered in the archives of the Bolshoi Theatre. The piece turned out to be a supplementary pas de deux for Swan Lake, composed by Tchaikovsky shortly after the ballet’s premiere in 1877. Anna Sobeshchanskaya, prima ballerina of the Moscow Imperial Bolshoi Theatre, had been dissatisfied with the original grand pas de deux and had asked Ludwig Minkus to compose an extra dance, choreographed by Marius Petipa. Refusing to allow the use of another composer’s music in his score, Tchaikovsky wrote a new piece of music to fit Petipa’s choreography. Tchaikovsky’s new pas de deux wasn’t included in the published score and so fell from ballet tradition.

In the next section of the pas de deux the man now takes centre stage, to perform a bravura variation full of dynamic jumps and turns. Balanchine encouraged his dancers to make full use of the space, and the man’s choreography seems designed to achieve this – with grand jetés covering the breadth of the stage, tours en l’air achieving remarkable height and a series of sissonnes doublé that combine both travel across the stage and elevation.

Then it’s the woman’s turn to dance a solo that, while only 40 seconds long, has become a favourite showpiece because of its precise, witty choreography. Verdy once said of the variation that ‘it’s as if she’s saying, “I’m going to delight you with details. I’m going to be champagne with bubbles”’. She was one of the rare few invited by Balanchine to join New York City Ballet from outside his school, and though she had neither the typical training or physique of an American ballerina, he was fascinated by her ‘eloquent feet’ – which became the focus of this solo. To Tchaikovsky’s chattering orchestra, the woman performs a series of relevés and échappés, ending with a développé into high extension – delayed as long as possible and finished with a nimble gargouillarde. Then follow a series of relevés changé, entrechat trois and, at the end of the solo, turns en diagonal in which the ballerina’s feet must move as fast as possible.

Finally, the man and woman come together for a dazzling coda that brings together his athletic and her lightning-quick movement. Balanchine saves the most exciting moment for the end of the duet: twice, the dancers sweep across the stage and the woman leaps as far as she can ahead of the man, who catches her mid-air in a thrilling fish-dive, and finally sweeps her into a lift in the splits, high above his head, as they rush offstage.

The Royal Ballet performs Tchaikovsky Pas de deux as part of a mixed programme with Viscera, Afternoon of a Faun and Carmen 26 October–12 November 2015. Tickets are still available.