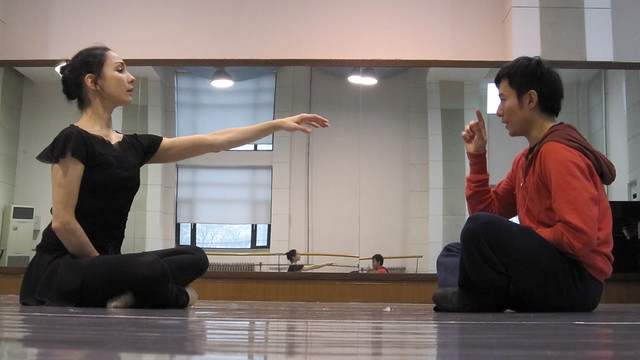 The piece created by Tamara and Fei Bo infused traditional ballet with kung fu and Chinese opera. Episode 1 was shown last night and you can watch clips from it now:

The first thing I noticed about the Chinese ballet is that it is much more influenced by philosophy than physicality - there was a lot more emphasis on meaning.

These ideas are typically expressed with little gestures of the hand or head. Such movements might not be the most beautiful to my eye, but because they have a shared cultural meaning - a meaning that is understood by onlookers because it is part of their tradition - it's beautiful to them.

One of the main challenges I experienced out there was trying to understand this complicated and subtle language. While I could always admire Chinese and Asian dance from a distance, I felt that I could never really understand the depth of meaning - and everything that comes with it - until immersing myself in the culture first hand.

The two remaining films, which follow Tamara on her ‘Fusion Journey’, will air on Wednesday 11 April and Friday 13 April at 9pm BST on CNN International (available on Sky 506, Virgin Media 607, Freesat 207 & Tiscali 506).