Two donors tell us about the rewarding experience of helping David McVicar's production onto the stage. 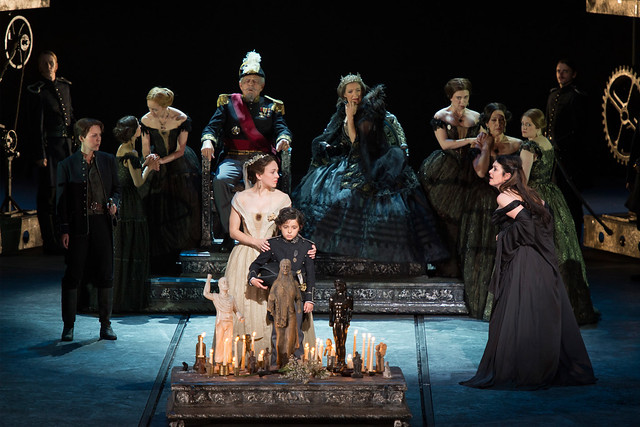 Les Troyens opened on the main stage of the Royal Opera House on 26 June; the first time the piece been performed here in 40 years.  For us though it wasn’t just an opening night, it also marked the end of a wonderful journey.

Almost a year ago, we decided to support the role of Iopas in Les Troyens. Supporting a role means a donation, yes, but it is so much more than that.  It provides the opportunity to get a remarkable insight into the intricacies of staging a world class production at Covent Garden.

Our journey started in early December with an exciting preview of the set design for Les Troyens. Es Devlin and David McVicar talked us through the concepts and revealed the set models. Later, we explored the costume design: Mortiz Junge talked about the costume designs and Fay Fullerton, Head of Costume Production, showed us around the Covent Garden workshops – a whole hive of industry hidden away behind the scenes at the Royal Opera House.

The sitzprobe rehearsal, which brings singers and the orchestra together for the first time, was sublime and the singing talent on stage, without costume or set, combined with the orchestra under Tony Pappano’s wonderful direction was mesmerising. In the case of Les Troyens, the cast includes a huge chorus which sat either side of the Orchestra Stalls, men to the right and ladies to the left, to create a stereo effect – a unique and memorable afternoon by anyone’s standard.

Later, at a dress rehearsal, we had a first sight of the fire-breathing horse – an impressive image that stays with you. David McVicar, often pacing up and down, Leah Hausman taking notes, both directing from near and far as the performance proceeded.

Then the opening night; the chance to see the finished product. Joining the cast and crew for a drink after the opening night provides an opportunity to say thanks, and well done, to the wonderful Anna Caterina Antonacci, Bryan Hymel, Eva-Maria Westbroek and the fantastic supporting cast.

In short, supporting a production makes you feel involved in the creative process.  It provides a wonderful insight into what it takes to perform at the highest level.  Our support ends with a strengthened respect for the talent, dedication and professionalism of the large team that is involved.