Stormy Weather #2: Smart techniques for bringing a storm to the stage from history's great composers

Beethoven inspired a host of operatic composers including Rossini, Verdi and Weill in musical methods for creating an operatic storm. 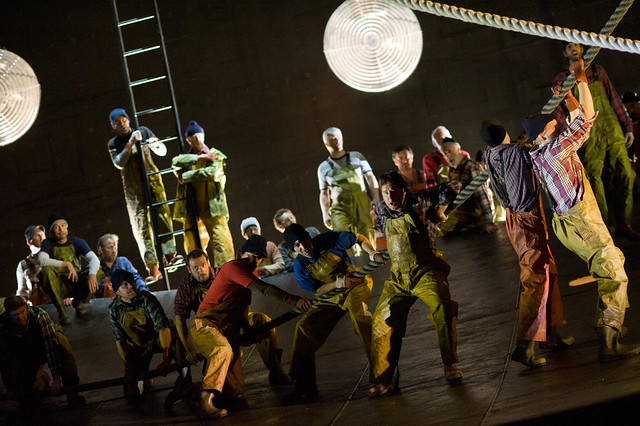 There are six operatic storms this Season. We’ve already explored the narrative and dramatic use of storms in Il barbiere di Siviglia, Rigoletto and Idomeneo. Now our focus shifts to the sounds themselves – the techniques composers use to conjure the storm.

Rossini’s depiction of a storm in the overture to Guillaume Tell is similar to previous Rossini storms. The rumble of thunder is created through drum rolls and tremolo bass notes. The flash of lightning comes from abrupt loud chords, right across the pitch range, especially with high notes from the top of the woodwind. The non-stop wind and rain is suggested through chromatically descending or ascending chords and melodic lines, usually in incessant, regular rhythms. At the end, the notes thin out in density and frequency to suggest a few remaining raindrops, while a low drum roll becomes quieter and quieter to suggest the storm’s retreat.

Verdi uses many of the same techniques in his Rigoletto storm music. Why are these musical elements so similar in two works by two different composers? First, ‘word painting’ in sound has always been a part of a composer’s approach, trying to find sounds that in some way suggest a specific image (as with onomatopoeia in words) – hence the repeated use of bass drum rolls for thunder. Second, the aesthetics of Western 19th-century Romanticism encompass the depiction of the ‘sublime’ wonder of the natural world, in contrast to the insignificance of humans. Which leads us to Beethoven.

Beethoven’s Symphony no.6 is known as the ‘Pastoral’. He started a trend: throughout the following century, sound as evocation of the grandeur of natural forces became an increasingly familiar part of the musical landscape. Notably, Beethoven’s storm is followed by a hymn of thanksgiving, a lyrical ‘calm after the storm’. Rossini famously followed storm with pastoral in the overture to Guillaume Tell, with its ‘cow calling’ melody on the cor anglais to evoke the now-peaceful Alpine scene.

Wagner’s sea storm music that opens Der fliegende Holländer is of a much more tempestuous order. It uses the same essential musical ingredients as Beethoven’s storm, but bigger and bolder: chromatic scales, throbbing and rolling bass, loud and soft contrasts, intrusive and violent full-orchestra chords. Except here the rise-and-fall of incessant chromatic scales suggests the movement of huge waves. The themes we hear in this stormy overture come back through the opera, notably with the bare 5ths of the opening horn melody that will become the 'Yo-ho's of the sailors, and a contrasting peaceful interlude that will represent Senta’s redemption of the Dutchman.

The last of our storms comes in Act II of Rise and Fall of the City of Mahagonny – but this one does not actually manifest itself. Instead, we have the anticipation of the storm, as Kurt Weill blurs the boundary between the sound of an approaching typhoon and the portrayal of the emotional state of the city’s frightened inhabitants. Weill’s music pulls together the aggression of low and steady drum strokes with quasi-religious choral settings (praying for salvation). There are quotations from music previously heard as though a flashback before disaster, and ritualistic announcements of the typhoon’s passage that punctuate the music into clear sections, each of which focuses on different responses of the inhabitants of the city. A side drum with a long quiet roll is followed by a silence: the typhoon has detoured around the city and gone on its way.

There are many storms in opera – other famous ones include those in Otello, Les Troyens, Die Walküre, Peter Grimes and Porgy and Bess – but whenever the wind gets up the rain starts to lash, you can be sure that some of these familiar musical effects will be there to conjure up a tempest and heighten the drama.