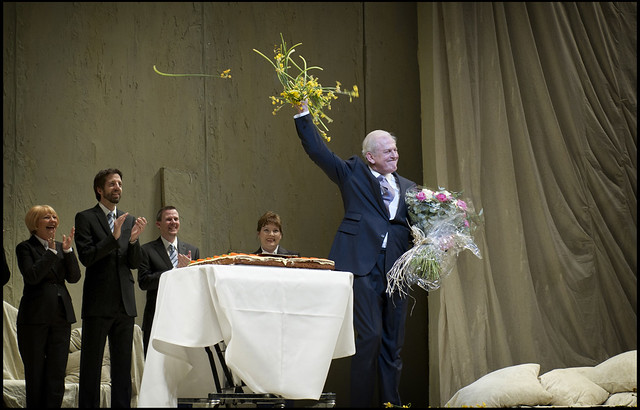 Sir Thomas Allen celebrated 40 years with The Royal Opera this week and was honoured at the opening night of the revival of Jonathan Miller's Così fan tutte.

The British baritone was presented with a celebration cake during the curtain call, a surprise from all at the company.

Sir Thomas is currently singing the part of the wily Don Alfonso in the production, a role he has received acclaim for in previous years, and recently appeared on BBC Radio 3's In Tune and BBC Breakfast to discuss performing in the opera as well as his distinguished career.

The singer made his debut with The Royal Opera as Donald in Billy Budd in 1971 before making his name as a Mozartian in Le nozze di Figaro, Don Giovanni and Così fan tutte (as Guglielmo). As his reputation grew, so did his repetoire. Subsequent notable roles included Eisenstein in Die Fledermaus, Beckmesser in Die Meistersinger von Nürnberg and the titular character in Gianni Schicchi.

In 1989 Sir Thomas became a CBE. This was followed 10 years later with a knighthood. Since 2002 he has interspersed singing with directing and to date has sung over 50 roles with The Royal Opera. Trivia fans may like to note that Billy Elliot writer Lee Hall admitted that the boy dancer's character was modelled on Sir Thomas.

The singer's international reputation was reflected in The Royal Opera House's World Stage campaign, which he fronted in 2009. On set for the film to accompany the print campaign, Sir Thomas told us about his various roles with the company: