Sir John Tomlinson on Meistersinger, Wagner and 40 years at the top

Ahead of his new role in Die Meistersinger von Nürnberg we speak to one of opera’s great elder statesmen about his career so far. 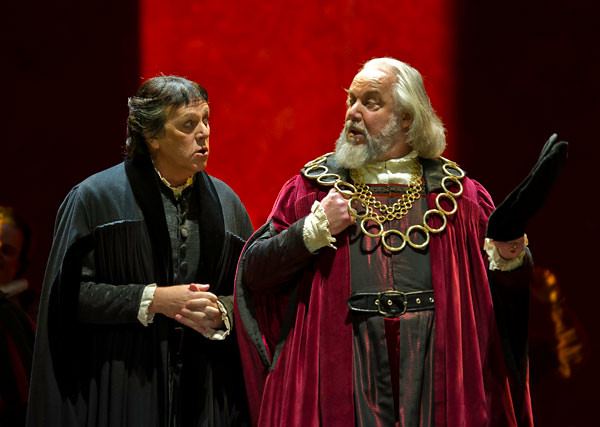 Sir John Tomlinson is full of enthusiasm about his return to The Royal Opera in the revival of Graham Vick's acclaimed production of Die Meistersinger von Nürnberg, which sees Tomlinson shift roles from Hans Sachs to Pogner.

Now in his mid-60s, Sir John has enjoyed a stellar career over the past 40 years. After a stint as a civil engineer, the bass singer made his Royal Opera debut in Salome in 1977 and since then has become one of the opera world’s most eminent performers, known in particular for his interpretation of Wagner. In the past 34 years, he’s trodden the boards of the world’s leading opera houses – singing at Bayreuth every year between 1988 and 2004 and receiving a knighthood in 2005. Despite the acclaim he’s received he remains extremely down to earth. "I’ve done far more than I ever thought; I’m still learning stuff all the time”. It’s clear he relishes his new part in one of the operas he is most closely associated with.

In the course of his career Sir John has taken a wide range of parts: “I’ve spent the last 20 years singing the best bass parts –from Claggart in Billy Budd to King Philip from Don Carlos, not to mention all those great Wagnerian roles. I’ve also had the honour of having two great parts written for me for this house by Harrison Birtwistle – the eponymous Minotaur and The Green Knight in Gawain. They’re all great parts for a voice like mine. I never expected to do some of them as they’re bass baritone parts and never thought my voice would be high enough. Fortunately however, it seems to have worked out well. There are certain parts I haven’t done that I’d like to however – Nick Shadow in The Rake’s Progress for example.”

He has over the years, worked with an extraordinary range of artists which reads like a who's who of the operatic and classical world. His first Meistersinger at Covent Garden was in 1993, when he sang the role of Hans Sachs with Thomas Allen as Beckmesser: “Thinking about working with Tom as Beckmesser in particular brings a smile to my face. He’s a very human performer and extremely creative, as well as being rather funny when he wants to be. We’ve had some great times.”

Conductors too have also left their mark on Sir John: “Conducting is a very mysterious business. I hugely enjoyed working with Bernard Haitink – he conducted Meistersinger so beautifully. In rehearsal, he doesn’t say much but everybody who is there is on the edge of their seats waiting to make great music - he’s got this magnetism.”

Over the course of his career, the singer has noticed a change in the approach in the approach of conductors: “I’ve worked with the likes of Von Karajan, Solti and Muti. The old school – Von Karajan and Solti – had the old dictatorial, tyrannical approach. It was very impressive and as a singer you did absolutely what they wanted. They didn’t give you much leeway or freedom. These days things are different. Antonio Pappano is conducting this revival and he is a joy to work with, he keeps a perpetual, lively pulse from start to finish of this long piece. No dictator, yet very demanding.

“I was taught a great deal about discipline in particular by the German director Harry Kupfer who I worked with on The Ring at Bayreuth in 1988. He taught me about stillness and intensity – a combination of the two. You don’t need to move and if you do it may be a very explosive movement, but stillness doesn’t mean deadness, it means even more effort mentally. It took me time to learn that.”

“Give audiences pleasure and express emotion. If you’ll be famous, you’ll be famous,” he muses when asked what his advice to younger singers would be, “concentrate on giving excellent performances”. Sir John’s work ethic and belief in the importance of art seemingly reflects those held by the Meistersingers in the opera.

Die Meistersinger von Nürnberg opens on Monday 19 December and will be broadcast on BBC Radio 3 on New Years Day at 2:45pm.