We take a look at the link between the Bard and the lyric stage, from Verdi to Adès. 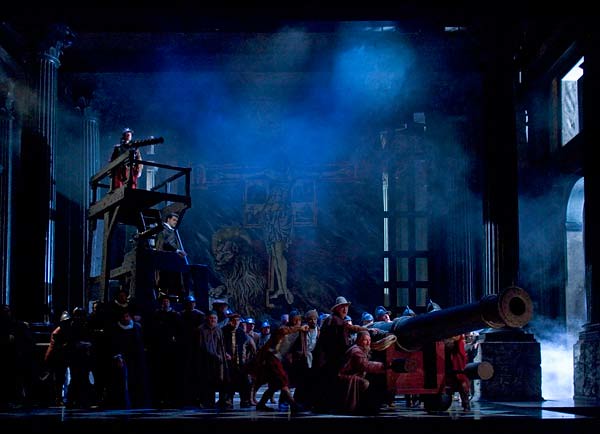 The production of Otello © Catherine Ashmore/ROH 2010

For a playwright who described music as ‘the food of love’ it is little wonder Shakespeare has inspired so many composers. Prompting operas by Adès, Bellini, Berlioz, Britten, Gounod, Purcell, Rossini, Thomas and Verdi, as well as several ballet scores – to say nothing of a certain musical by Leonard Bernstein – Shakespeare’s impact on the world of music has been enormous.

No composer has yet to prove more fanatical in his love of Shakespeare than Verdi, although he had significant local precedents. The earlier operas were, however, rather more loosely based upon the work of Shakespeare: Rossini’s Otello came from a modern French adaption of the play’s source material, while Bellini’s I Capuleti ed i Montecchi had little to do with the Englishman’s drama.Verdi decided to be more thorough and went back to the originals via reliable Italian translations.

Despite never having seen Macbeth on stage, Verdi created a formidable adaptation. He provided a vivid score, pitting fantastical elements against the brooding world of its infamous central couple. The opera Macbeth was so well received at its premiere in 1847 that Verdi was keen to capitalize on the success. But he faced more of a challenge with King Lear. Verdi commissioned a text from Salvadore Cammarano, but the librettist died before he could complete either King Lear or Il trovatore.

Undeterred, Verdi turned to Antonio Somma – the librettist of Un ballo in maschera (1859). But even though two versions of the libretto still exist, Verdi left Lear undone. After the premiere of Aida in 1871, he announced his retirement and his Shakespearean ambitions seemed at an end.

But Verdi’s publisher Giulio Ricordi knew just how to tempt him back. Working with the writer Arrigo Boito – who had at one time been a harsh critic of Italian opera – Ricordi proposed a new work based on Othello. Duly intrigued, Verdi and Boito began work on their radical revision of the play, cutting the entire first act and slowly conceiving an adaptation to rival even the original play.

Such sweeping changes were to become an essential part of their working relationship. After the terrific success of Otello at La Scala in 1887, the pair began a new opera based on the Falstaff narratives in The Merry Wives of Windsor and the two parts of King Henry IV. Falstaff opened in 1893, throwing down a gauntlet to subsequent operatic adaptors.

More recently Thomas Adès and his librettist Meredith Oakes took a suitably radical approach with The Tempest – a subject Verdi himself considered. Preserving the spirit of the original, but creating a new text, Adès’s opera not only proved that Shakespeare is an unbeatable source of material but that Verdi’s dramaturgical daring is worth the gamble.