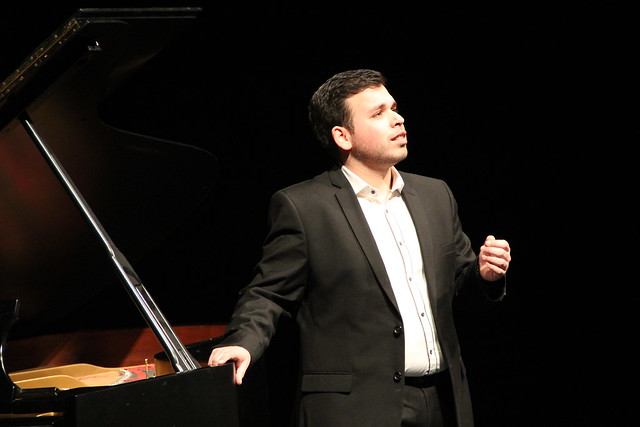 On 6 January, Jette Parker Young Artist Luis Gomes opened the 2014 programme of lunchtime recitals with a performance in the Linbury Studio Theatre.

Accompanied by Artistic Director of the Jette Parker Young Artists Programme David Gowland, he performed works by Richard Strauss, Federico Mompou and Sergei Rachmaninov. He dedicated the performance to his fellow student at Guildhall School of Music & Drama, Eva Ganizate, who was killed in a cycling accident in France at the weekend.

‘Singing in recital gives you a chance to re-invent the best poetry and music in the world by adding your own interpretation and ideas to it,’ said Luis. ‘The work you do on the music and the texts is similar to when you are preparing for an opera on stage, but you are much more exposed in recital and you have less help and support. You are your own director and so it is a big challenge to bring out the full potential of the poetry and music.’

The lunchtime recitals offer Young Artists the chance to learn repertory of their choice with some of the world’s top vocal, language and stagecraft coaches. Earlier this Season, Jette Parker Principal Jihoon Kim, accompanied by former Young Artist Jean-Paul Pruna and six Korean musicians, performed a programme based on Korean art songs, including traditional Korean costumes and instruments.

‘It was very special for me to be able to show my Korean musical background and to introduce traditional Korean music, instruments and costumes to a British audience,’ he said. ‘I have previously given two recitals of European music as a Jette Parker Young Artist, but to have presented a traditional Korean recital in Europe is a dream come true.’

The recitals offer an opportunity for the Young Artists to engage with and sustain an audience for an hour on their own; a very different experience from performing on the ROH Main Stage.

Tenor David Butt Philip will perform work by Ralph Vaughan Williams and Benjamin Britten in a recital on Monday 20 January.

‘Singing in recital provides a more intimate and direct relationship with the audience than performing on the operatic stage. Without the support of an orchestra, costumes and staging, you’re completely reliant on communication of the text to engage the listener,’ he said. ‘Such performances enhance our skills as storytellers and allow us to experiment with a wide range of vocal colours, a flexibility that’s not always practical on the main stage.’

The lunchtime recitals take place in the Crush Room, Linbury Studio Theatre or the Paul Hamlyn Hall. They are free to attend and tickets can be reserved online up to nine days before the concert. However, although advance tickets are often sold out, tickets are available in person on the day.

The recitals also feature performances by members of the Orchestra of the Royal Opera House, The Royal Opera Chorus and Southbank Sinfonia.  View the full lunchtime recital listings.

The Jette Parker Young Artists Programme is supported by Oak Foundation. Find out more about the programme in our News and Features section.