Seat stories: The personal tales behind the brass plaques

Opera and ballet enthusiasts from around the world have chosen to commemorate loved ones, give gifts or mark favourite spots by naming a seat in the auditorium. 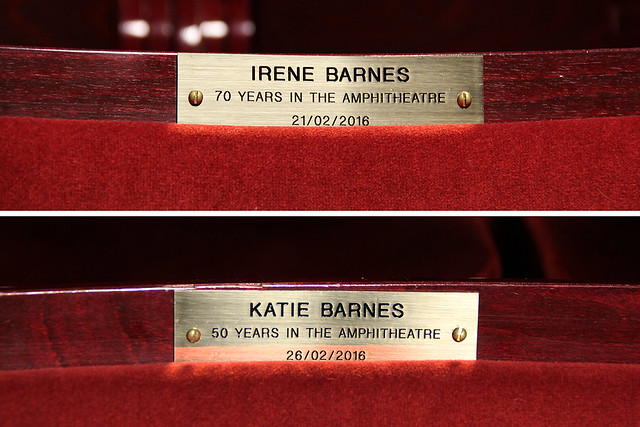 Nearly 750,000 people visit the Royal Opera House every year but only a few hundred have their names on seats in the auditorium.

These opera and ballet enthusiasts have chosen to leave a lasting legacy by offering a seat-naming donation, which entitles the donor to their name engraved on a brass seat plaque and displayed for a generation, while supporting the artistic work of the Royal Opera House. It also comes with an invitation to a private viewing of the plaque and a backstage tour.

So what inspires audience members to put their name on a seat?

Mother and daughter Irene and Katie Barnes chose to put their names on seats U60 and V58. They remember clearly the first performances they attended at the Royal Opera House – Irene, the post-war gala opening of The Sleeping Beauty on 21 February 1946 and Katie, La Fille mal gardée on 26 February 1966.

‘When we realized that our 70th and 50th anniversaries at the Royal Opera House fell within a few days of each other, we decided to mark the joint occasion by using a small legacy from my late father to name two seats in the Amphitheatre. Starting out as ballet lovers, since 1981 we’ve become confirmed operagoers too, and we have enjoyed hundreds — if not thousands — of evenings here in our combined 120 years,’ says Katie.

Long-standing Friend of Covent Garden Judy Bailey has named seat B63 in the Amphitheatre. She explains, ‘The Royal Opera House has become a very special place for me. To have a named seat is a very unique expression of my thanks for many hours of happiness and enjoyment. The seat number I have chosen represents the year when, as a student, I met my husband at the Freshers’ Ball!’

Catherine and Richard Millhouse named seat S66 in the Amphitheatre to support the Royal Opera House in a special way and as a gift for their young ballet-loving daughters, adding, ‘it is great to know that each performance someone will be sitting in ‘their seat’, wondering who they are!’

Do you have a favourite seat in the Royal Opera House auditorium? Share your stories below.

Find out more about naming a seat by contacting Alice Macrae on 020 7212 9127 or alice.macrae@roh.org.ukisobel.evans@roh.org.uk