Salvatore Sciarrino: On the edge of sound

As The Killing Flower gets its UK premiere, we look at the works of a composer influenced by artists as diverse as Verdi and Kafka. 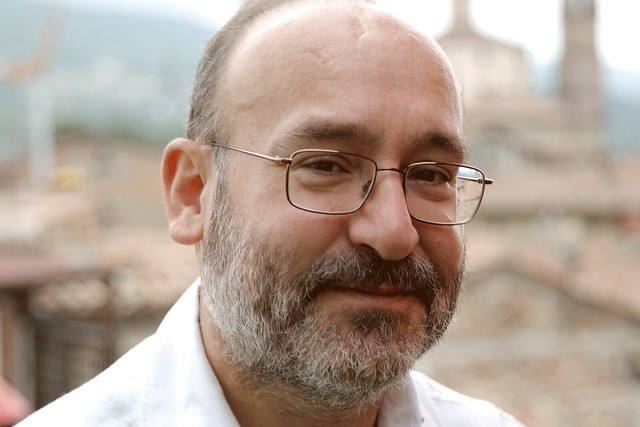 Music Theatre Wales’s staging of Salvatore Sciarrino’s The Killing Flower on 24 October will be the opera’s first UK staging. It’s an overdue tribute to a composer widely regarded as one of contemporary music drama’s greatest proponents.

The music of this self-taught former wunderkind exists in a shadowy world just on the edge of audibility. Against a fabric of silence interspersed with unmusical knocks, scrapings and shivers, lyrical lines emerge warmly, flaring against the darkness. Sciarrino’s incredibly detailed scores notate complex rhythms that draw on birdsong and chaotic natural forms – but he never disrupts the sense of his text, always making innovative use of the Italian operatic voice.

The elliptical narratives of Sciarrino’s stage works are the perfect complement to this aural world of shadows. They’re stark, spare and elusive, dominated by images that gather a surreal and nightmarish significance. Myth has been a frequent inspiration, from his first opera Amore e Psiche, which had its premiere in 1973. In his second opera, Aspern, Sciarrino began weaving together disparate texts – this adaptation of Henry James’s suspenseful novella uses some of Lorenzo da Ponte’s libretto for Le nozze di Figaro. 1980’s Cailles en sarcophage (Entombed Quails) is a meditation on the cult of fame, which draws on a vast array of texts by authors including Marlene Dietrich and Frank Wedekind.

The surrealist poetry of Jules Laforgue provides the inspiration for two acerbic inversions of Western myth, Lohengrin (1982) and Perseo e Andromeda (1991). 1985’s La perfezione di uno spirito sottile (The perfection of a subtle spirit), on the other hand, is a celebration of nature with sparse scoring for flute, soprano and bells providing windows into sounds of the outside world. Sciarrino had explored these bare textures four years earlier in Vanitas, a hauntingly beautiful ‘still life’ on the fallibility of human life, for a tiny ensemble of mezzo-soprano, cello and piano.

The lyricism of Sciarrino’s lines often develops into extensive musical quotations. American songs feature in Cailles en sarcophage, and Aspern coalesces into a simple diatonic hymn tune. Sciarrino’s only ballet, Morte a Venezia (Death in Venice, based on Thomas Mann’s novella) has Bach’s Magnificat at its heart while Macbeth uses fleeting quotations from Verdi’s Shakespearean adaptation and from the hellish end of Mozart’s Don Giovanni.

Luci mie traditrici (‘My betraying eyes’, translated by the composer as The Killing Flower) alludes both to the exquisitely complex music of Carlo Gesualdo, whose murder of his wife and her lover is partial inspiration for the opera, and the anachronistic music of Gesualdo’s near contemporary Claude Le Jeune.

Increasingly Sciarrino’s operas have explored themes of isolation and loneliness. Infinito nero (Infinite blackness) for mezzo-soprano and eight instruments sets the ravings of 16th-century Catholic mystic Maria Maddalena de’ Pazzi, as transcribed by eight fellow nuns. Da gelo a gelo (From ice to ice) draws from one year of the fictionalized diaries of Izumi Shikibu, an 11th-century Japanese poet who describes her socially transgressive love affairs in the third person. La porta della legge (The gate to the law) adapts Kafka’s nightmarish examination of an individual crushed by bureaucracy, and in Sciarrino’s hands is a furious indictment of Italy’s current cultural policy. Sciarrino’s latest stage work, Superflumina, is an unshrinking examination of a homeless woman ignored by the stream of commuters who step over her.

Sciarrino’s use of text and silence is unique in opera. But it’s also the fragility of his sound world, its claustrophobia, sadness and breathtaking beauty that make him one of the most compelling composers writing today.

The Killing Flower will be staged by Music Theatre Wales on 24 October 2013. Tickets are still available, although some are available only by ringing or visiting the Box Office in person.