Royalty on stage: Famous examples and struggles with censorship

To celebrate Richard Jones's new production of Gloriana, a look at changing depictions. 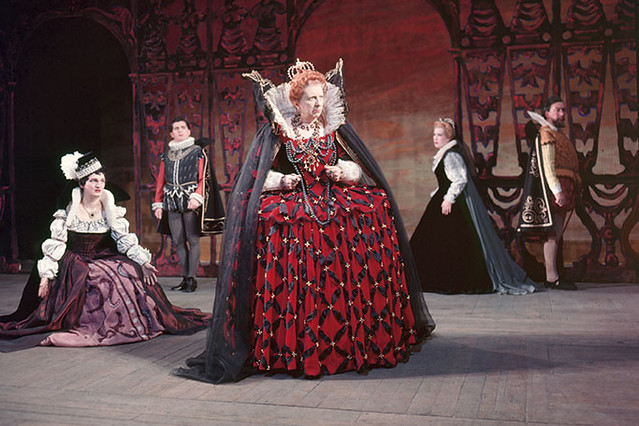 Opera began as a court entertainment. Wealthy nobility in the 17th and 18th centuries had their own theatres, composers, musicians and theatrical troupes to entertain them and their guests. So it’s not surprising that there was a good degree of flattery on stage to reflect the status of the aristocrats who paid for it all. Baroque and Classical operas are full of scenarios in which rulers are challenged, angered and betrayed. But whatever happens in the course of the story, the monarch (mythological or historical) invariably ends the work through dispensing a bit of noble forgiveness.

This type of opera was part an education in how to exercise power and part a distancing technique (‘any resemblance between those on stage and those in the audience is entirely coincidental’). It’s a pattern to be seen in such a work as Handel’s Tamerlano, and with Mozart’s La Clemenza di Tito (The Clemency of Titus) the title gives it away! Even presenting Queen Elizabeth I in an opera written for the Coronation of Queen Elizabeth II – as Gloriana does – has loud echoes of this.

We can easily forget today how powerful and suggestive stage works could be. Gloriana’s Act III is about the rebellious uprising led by the Earl of Essex. The uprising’s failure results in Essex’s execution on the orders of Queen Elizabeth I. It is a matter of fact that on the night before this historical event of 8 February 1601 a performance of Shakespeare’s Richard II was given at The Globe theatre by The Lord Chamberlain’s Men, for whom Shakespeare wrote. This was a change from the planned play – the actors were paid 40 shillings by the leading aristocratic supporters of Essex’s uprising. Significantly, it is a play about a weak king with no direct heir whose throne is usurped for the good of the country. In Elizabethan times, theatres provided one of the few places crowds could legally assemble in large numbers, and in a situation where they could be incited to mob action by rhetoric from the stage. Theatres could be dangerously political places.

It’s not surprising then that censorship of the stage became part of the government’s role. And it wasn’t just the potential for political incitement that caused concern, but increasingly anything that could corrupt public morals or offend individuals – especially the monarchy. By the early 1900s, censorship of British theatre routinely stopped any portrayal of living people or those whose immediate descendants were still living.

We are used now to seeing the present British royal family portrayed on film and stage – Helen Mirren has cornered today’s market for Queen Elizabeth II. Yet around the time the current Queen was crowned, the Lord Chamberlain was regularly banning the presentation of Queen Victoria on stage, while any inclusion of the reigning monarch in a drama was unthinkable. The Lord Chamberlain’s censorship continued right up to the abolition of his powers in 1968. One of the last plays to be banned from public performance featured Queen Victoria having a lesbian affair with Florence Nightingale. That play can now be performed legally of course, but it hasn’t yet been turned into an opera…

What are your favourite depictions of royalty on stage?

More about the presentation of monarchy in drama can be read in the article ‘We Three Queens’ in the programme that accompanies Gloriana.

Gloriana runs from 20 June to 6 July. Tickets are available now.
It will also be screened live in cinemas on 24 June, and will be broadcast live by BBC Radio 3 at 6.45pm on 29 June.
This production has been made possible thanks to the generous philanthropic support of the Britten-Pears Foundation, the Boltini Trust and Lindsay and Sarah Tomlinson.