On the trail of Tosca in Rome

Each of the acts of Puccini’s 1900 opera has a very particular setting in the ‘eternal city’. 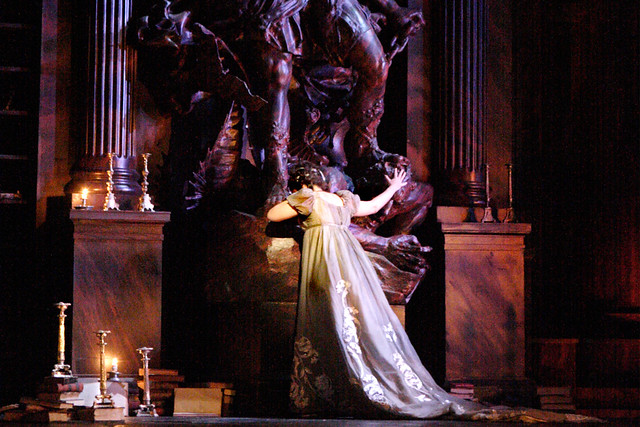 Puccini was a stickler for detail, taking great care to set his operas in exact geographic locations. When he first saw the play La Tosca, by French dramatist Victorien Sardou, in Milan in 1887, he found a golden opportunity to write a very meticulously placed opera. Although a Tuscan by birth, Puccini would have known the Italian capital well – indeed Tosca had its premiere in the city. Sardou set the action of the play in three contrasting settings: the church of Sant’Andrea della Valle; the elaborate Palazzo Farnese nearby; and the commanding Castel Sant’ Angelo over the River Tiber.

These famous buildings survive to this day. So you can go and ‘recreate’ Tosca in your mind (with the aid of your trusty mobile streaming app of choice). Since the premiere at the Teatro Constanzi in Rome, many productions have taken Sardou and Puccini at their word by replicating the exact timings and settings of the three acts and, in 1992, a performance was broadcast live from the actual locations. So visiting these sites is a great way to get to know your Tosca.

Inside the cupola, Sant’Andrea della valle in Rome © ROH 2011

A painting of the crucified St Andrew dominates the church of his name: Sant’Andrea della valle © ROH 2011

Act I – The Church of Sant’Andrea della Valle

Setting the scene: Tosca opens with the escaped convict Angelotti stumbling into the church of Sant’Andrea della Valle, right in the heart of Rome. He’s looking for the Capella Attavanti (the private chapel of his sister the Marchesa).

On location: Angelotti must have been searching for a while, as there’s no such chapel in the church. The name was Sardou’s invention, but the chapel on which it is based is immediately to the left of the door. Coming in off the teeming main street, the Corso Vittorio Emanuele II, Sant’Andrea really is a quiet haven in the midst of the racket of central Rome.

The Barberini Chapel is the only private space to be hidden behind gates. Sadly, those expecting Cavaradossi’s blonde bombshell of a Madonna peering down at them with her infamous blue eyes will be disappointed. The chapel is rather dark and features more muted religious paintings. Buried in the corner of the church, it doesn’t really benefit from the streaming light of an Italian afternoon (as it must have done on the June day on which Sardou set his play). But the dark recesses in the chapel must have been perfect for Angelotti’s hiding place. And looking down the nave, towards the gruesome painting of St. Andrew’s execution on an inverted cross, you can feel the chill of Scarpia, chief of police, approaching.

Setting the scene: Once Scarpia is on to Angelotti’s scent, there’s no stopping him. But rather than pursuing the prisoner through Rome’s cobbled winding streets, he preys on Tosca’s jealousy to unlock the clues. Through Tosca he will crack her lover Cavaradossi, who he’s sure has helped Angelotti to escape. After the scenes in the church, Scarpia retreats to his apartments in the nearby Palazzo Farnese. Tosca, something of a local celebrity, just happens to be performing in the gardens that evening. Situated between the River Tiber and the church, the Palazzo is an enormous Renaissance villa, originally built for the Farnese family, one of the most powerful and influential dynasties of the Renaissance.

On location: For such a grand building, it’s unlikely that a civil servant such as Scarpia (however controlling) would have been gifted apartments in the building. Part designed by Michaelangelo, it had been the home of Cardinals and Queens, rather than policemen. But it’s an evocative edifice, framed by an impressive square. Unfortunately, nowadays, you can’t gain access to the palace unless you have business with the French, as this is where they’ve had their Roman embassy since 1874. Although Mussolini sequestered the property during his time in power, the French were allowed to stay on for the princely rent of 1 Euro a year.

You can get some sense of the atmosphere of Act II when the great doors to the palace open. There are vast courtyards stretching behind its imposing façade. And the gardens that extend at the back it would have been where Tosca sang her festive cantata in Act II (with Scarpia listening from his rooms above). But as the French diplomats leave work, throwing jackets over their shoulders and making their way to local bars just off the Campo de’ Fiori, it’s impossible to think of Scarpia torturing Caravadossi behind its closed doors. Still, on a balmy Roman evening, you can pause and imagine that you hear Tosca’s sublime ‘Vissi d’arte’, just as Scarpia does at the climax of Act II.

Setting the scene: The opening of the final act of Tosca is one of the most evocative in the repertoire. The pitches of the bells across Rome that can be heard at dawn are entirely accurate, notated on a trip the composer took to the city when he sat on the ramparts of the castle. A Roman poet, one Luigi Zanazzo, wrote the authentic text for the Shepherd Boy’s half-heard song. It makes for a placid opening to a violent finale. Having got his guarantee for Cavaradossi’s release, Tosca kills Scarpia. But the joke is on her; Scarpia has not kept his promise.

Cavaradossi has been imprisoned in the Castel Sant’Angelo. The imposing cylindrical building was first built as a mausoleum for the great Emperor Hadrian, around 135 AD, but it was later used as a Papal prison and is attached to the Vatican by a lengthy series of ramparts. Executions used to take place in the inner courtyard, but productions of Tosca tend to set the action right up on the battlements. The reason being that Tosca, discovering that her lover has actually been killed (rather than the fake execution for which she hoped), soon dispatches herself by leaping to her death from the roof.

On location: Whatever time of day you visit (dawn feels a little merciless on a holiday), the Castel is still an imposing sight, with Peter Anton von Verschaffelt’s 1753 statue of St. Michael slaying Satan (in the figure of a dragon) dominating the skyline. Unlike in Tosca’s time, however, when fields surrounded the Castel, the present-day rush of the cars along the riverbank disturbs anything of the eerie peace that Puccini so brilliantly captures. But with all Rome laid about before her, you still can’t imagine a more dramatic suicide than throwing yourself off this terrifying parapet. ‘O Scarpia, avanti a Dio!’