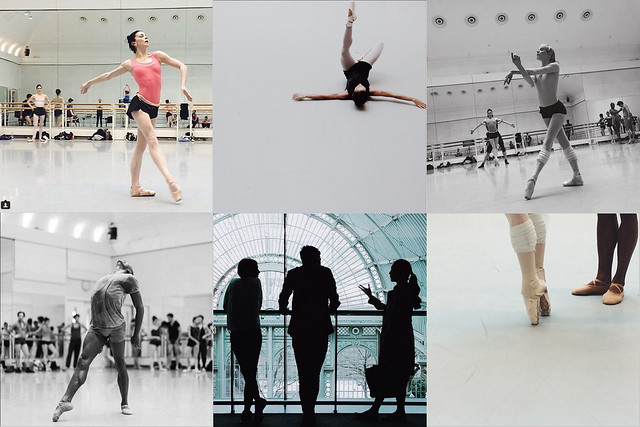 Olly was one of six top Instagrammers invited to the Royal Opera House earlier this week for an exclusive look behind-the-scenes at the creation of Wayne McGregor’s new ballet Woolf Works.

The first full-length piece Wayne has created on The Royal Ballet, Woolf Works is inspired by the writings of modernist pioneer Virginia Woolf, and set to a newly commissioned score by Max Richter.

‘When we walked into the rehearsal, Wayne McGregor briefly said that he wanted us to capture the movement. For a few moments, everything was still, but when the music started, for almost 45 minutes straight, everything in front of us was moving!’, continues Olly.

The ballet draws on three of Woolf's best-loved novels – Mrs Dalloway, Orlando and The Waves – as well as extracts of her autobiographical writings. The Instagrammers were invited to sit in on a studio run-through of Act II, which is inspired by Orlando.

‘Orlando is all about gender and identity, and the coming together and pulling apart in the dance seemed reminiscent of the splintering and coalescing of an identity’, says Instagrammer Dolly Brown (@londonlivingdoll). ‘Combined with the Elizabethan-inspired costumes we saw – designed by Moritz Junge – this piece is going to be quite something. I can't wait to see it in performance.’

The ballet is created on a wide range of Principals and corps de ballet dancers. To get your own insight into the production, watch films we captured of Wayne rehearsing with Edward Watson, and with Alessandra Ferri and Federico Bonelli.

Other Instagrammers who joined us included @h_cato, @deanmartindale, @josephowen and @samsette. Keep an eye on their feeds or the tag #ROHWoolf for more photos. In the meantime, here are a selection:

The #ROHWoolf Instameet follows the first #emptyROH instameet last year, during which Instagrammers were invited to explore the ROH's backstage departments and watch The Royal Ballet preparing for a day of rehearsals during morning class.

The production is given with generous philanthropic support from David Hancock, Randa Khoury, Linda and Philip Harley, Victoria Robey, The Woolf Works Production Syndicate and an anonymous donor.