Costumes on display in exhibition about celebrated photographer and designer Cecil Beaton. 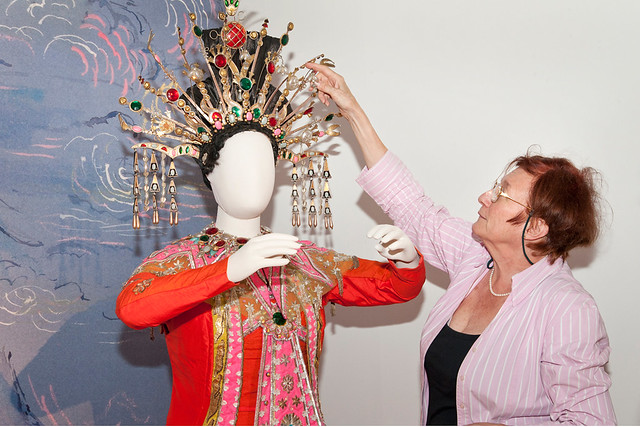 One of the most popular images on the ROH Collections website is that of the costume and headdress designed by Cecil Beaton for Puccini’s opera Turandot, first seen at the Royal Opera House in 1963. Beaton’s designs for this production, which is set in a mythical China, were informed by his work as a war photographer in Burma, India and China in the 1940s. This stunning costume is included in the exhibition Cecil Beaton:The Theatre of War, which opened at the Imperial War Museum (IWM) on 6 September.

Members of the IWM staff came to the ROH Collections store some months ago to look at this costume, as well as items from Frederick Ashton’s ballet Apparitions. Last week, the items were delivered to the IWM. Judith and Bernard Doré, who do almost all of the cleaning, conservation and display of historic costumes for the Royal Opera House, undertook the installation of the costumes.

Turandot was the only opera that Cecil Beaton designed for the Royal Opera House, but he did design several ballets for The Royal Ballet. His earliest was Frederick Ashton’s Apparitions, created in 1936 at Sadler’s Wells Theatre with the young Margot Fonteyn as the Woman in ball dress and Robert Helpmann as The Poet. When Apparitions was first performed at the Royal Opera House in 1949, still with Fonteyn and Helpmann, Beaton altered his designs. The headdress, fan and other accessories used by Fonteyn in this 1949 revival have also been lent to the Imperial War Museum.

While the exhibition is primarily about Beaton’s war photography, it also examines his work as author, artist and designer for stage and film. It is a wonderful opportunity for the Royal Opera House to show its work in a different context, and our objects provide a rich contrast to the striking images of war and suffering featured in the exhibition.

Beaton also designed Frederick Ashton’s ballet Marguerite and Armand in 1963, created for Margot Fonteyn, Rudolf Nureyev and The Royal Ballet. This work is still in The Royal Ballet repertory and will be performed this winter in an all-Ashton mixed programme. Some of the costumes worn by Fonteyn and Nureyev, from ROH Collections, will soon go to the Fine Arts Museums of San Francisco de Young and Legion of Honor for the exhibition Rudolf Nureyev A Life in Dance.

Find out more about other productions designed by Cecil Beaton for The Royal Ballet.

The ROH historic costume collection is home to over 5,000 items, and features costumes from Royal Ballet, Royal Opera and Birmingham Royal Ballet productions. The oldest item is a pair of shoes worn by soprano Adelina Patti on her debut in 1861 in Lucia de Lammermoor and La traviata in the 1860s. Find out more about the collection.