This extensive and beautiful collection from a pioneer of opera costume design gives an invaluable insight into the history of stagewear. 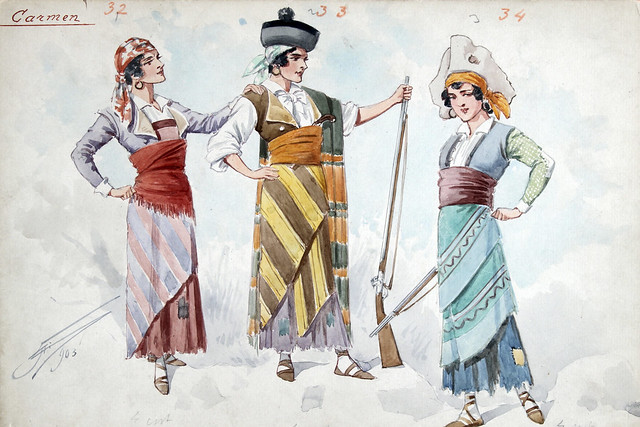 ROH Collections holds around 1,500 original costume and accessory designs for productions at the Royal Opera House, dating as far back as the late 19th century. These designs are an invaluable resource for people interested in learning about how a production was staged. They show the vision designers had in the early stages of their work on a production, and can offer a fascinating insight into the working practices behind a production when compared with the costumes themselves.

The majority of the ROH’s Design Collection consists of works by Attilio Comelli. Comelli was a prolific Italian designer in the late 19th and early 20th century and was Artist in Chief at the Royal Opera House from the 1890s, as well as working at a number of other theatres around London. Comelli was a pioneer for in-house designers at the ROH; before him, opera singers were largely required to bring their own costumes, and on the rare occasions designers were used they were seldom credited in programmes as they are today.

The Comelli Design Collection includes designs for nearly eighty opera productions at the Royal Opera House. The designs vary in their nature; many were done in watercolour and pencil – pieces of art in their own right – while others are rough sketches. On many designs Comelli has signed and dated them, and noted additional information such as the character and wearer’s name and even their measurements. Many designs also have fabric samples attached, which shed further light on Comelli’s vision. Often Comelli placed designs for multiple characters on one sheet of paper, or detail different angles of one costume.

Costume designs by Attilio Comelli for a Male Servant to Nureddin and Naddawakee and a Male Citizen of Baghdad in Der Barbier von Baghdad, 1906 at the Royal Opera House, Covent Garden © 2015 Royal Opera House

Costume designs by Attilio Comelli for L'Ufficiale del Registro and Il Commissario Imperiale in a production of ‘Madama Butterfly’ in 1905 at the Royal Opera House, Covent Garden © 2015 Royal Opera House

This beautiful collection not only shows how skilled a designer Attilio Comelli was, but also provides an invaluable record of the development of professional costume design.