ROH Collections Item of the Month: Photos of early Royal Ballet Tours to the USA and Canada

This new donation from a former horn player with the ROH Orchestra gives a glimpse into life on The Royal Ballet’s 1949 and 1953 tours. 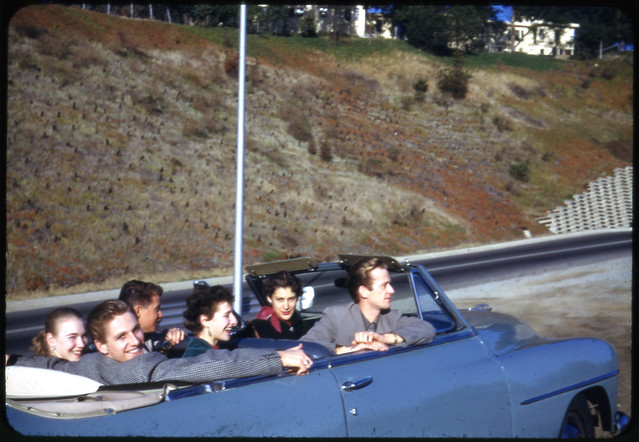 The Royal Ballet (then Sadler’s Wells Ballet) made its first visit to the USA and Canada in 1949, with a tour that cemented the global reputation of the Company and made an international star of its prima ballerina Margot Fonteyn. A recent donation to ROH Collections from Richard Dunn, former principal horn of the Orchestra of the Royal Opera House on tour, offers a unique insight into life on the road for the Company, both on that first groundbreaking tour and on their third visit to North America in 1953.

The 1949 tour started in New York and visited six other US cities, including Washington D.C. and Chicago, before continuing to Ottawa, Toronto and Montreal. The 1953 tour was even more extensive, taking in 21 cities in the USA and four in Canada. Dunn’s collection includes holiday snaps of members of the Company enjoying their time off, visiting Niagara Falls in 1949 and taking a road trip in San Francisco in 1953. There’s also a blurry photograph of Fonteyn and Michael Somes waiting backstage during a 1953 performance.

Portrait of Richard Dunn, First Horn with American Tour Orchestra for the 1953 Sadler's Wells Ballet tour of the USA and Canada. Photo donated by Richard Dunn

Shirley Bateman, Richard Dunn, Anya Linden and an unknown during the 1953 Sadler's Wells Ballet tour of the USA and Canada. Photo donated by Richard Dunn

Souvenir brunch menu for the Union Pacific Railroad journey during the 1953 Sadler's Wells Ballet tour of the USA and Canada. Photo donated by Richard Dunn

Souvenir brunch menu for the Canadic Pacific rail journey during the 1953 Sadler's Wells Ballet tour of the USA and Canada. Photo donated by Richard Dunn

Dunn also donated three souvenir menu cards, saved by Dunn from the Canadian leg of the 1953 tour and offering insights into dancers’ tour diets. Brunch with Union Pacific Railroad seems to have been quite a heavy affair, with sautéed calf's liver and thick broiled lamb chop on the menu. Canadian Pacific brunches were less adventurous (and 50¢ cheaper) but the menu warns that ‘employees are not permitted to accept or serve orders given verbally’. Dunn recalls one brunch spent with Fonteyn: ‘One morning I had breakfast with Margot. We were stopped for water in Canada. She kept raising her cup to her lips then talking some more; finally the train started with a lurch and the coffee went all over her. But she just laughed.’

Find out more about the work of ROH Collections.

The Royal Ballet will tour the USA in June 2015, performing in Washington D.C., Chicago and New York City. Find out more about the Tour.